Tonto Dike Responds To Churchill’s Disclaimer, Says She Married Him With Her Money

27
SHARES
116
VIEWS
Share on FacebookShare on TwitterShare on Whatsapp

Nigerian Actress Tonto Dike, has responded to her husband’s documented disclaimer where in he alleged that she has full custody of their son.

Churchill had released this document on Friday.

According to the disclaimer, the alleged false judgement by a customary court in Abuja is false.

In response to this, his wife Tonto Dike took to her social media to reveal that he had funded their marriage in various ways. 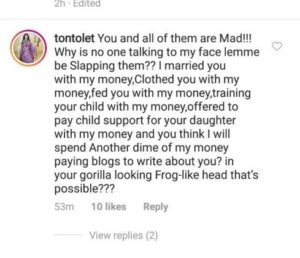 Got Any News Or Advert For Us? WhatsApp https://wa.me/7038111972
Tags: Olakunle ChurchillTonto Dike
Share11Tweet7Send

Tonto Dikeh: My ex-Husband doesn’t last up to 40 seconds in Bed (Watch Video)

Despite Being Attacked Desmond Elliot Gets Re-elected