Bayern Munich, had made a perfect day yesterday as they thrashed Wolfsburg 6 – 0.

Bayern, who host Liverpool on Wednesday in their Champions League, last 16, return leg clash after a goalless draw at Anfield, went top on goal difference from Dortmund, who needed late goals to win 3-1 at home to Stuttgart. 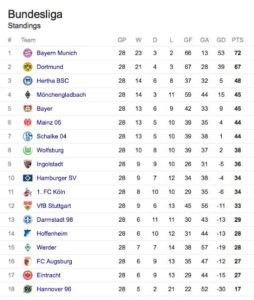 In reaction to their victory, head coadc of the club Niko Kovac, said, “I’m very pleased. We want to be just as focused on Wednesday,”

The club will be playing against Liverpool on Wednesday March 13th.

No Content Available
Got Any News Or Advert For Us? Email us: Info@abacityblog.com WhatsApp https://wa.me/2347038111972
Tags: Bayern MunichBundesliga
Share13Tweet8Send

Following the upsurge of the COVID-19 outbreak in the state, the Tsaunin Kura GRA Residents Association (Sabo GRA), organisers of...

Organisers of the annual Cohesion Football Tournament (CFT) have announced the second edition of the event scheduled to take place...

Despite Being Attacked Desmond Elliot Gets Re-elected

Why God Made me Abia Governor by Okezie Victor Ikpeazu