Former Governor of Abia and Senator-elect, Dr. Orji Uzor Kalu is set to lead a powerful delegation of the National Movement for the Re-election of Buhari (NMFRB) on a nationwide “thank you” tour for the president’s re-election victory.

In a statement personally signed by the former governor who doubles as National Co-ordinator, and made available to Newsmen, the group said the tour will afford it the opportunity to sensitize the general public in its post-election activities.

“In appreciation of their support for the re-election of His Excellency, Muhammadu Buhari (GCFR), President and Commander-in-Chief of the Armed Forces, Federal Republic of Nigeria, the leadership of the National Movement for the Re-election of Buhari (NMFRB) will embark on a “Thank You” tour to the underlisted states…

Wednesday April 10, 2019:
• Courtesy call on the Governor of Kaduna State

Friday April 12, 2019:
• Courtesy call on the Governor of Katsina State
• Homage to Emir of Katsina

“This will afford the Executive of the group the opportunity to sensitize the general public on its post election activities.

“The next level of the tour will cover some other parts of the country.” 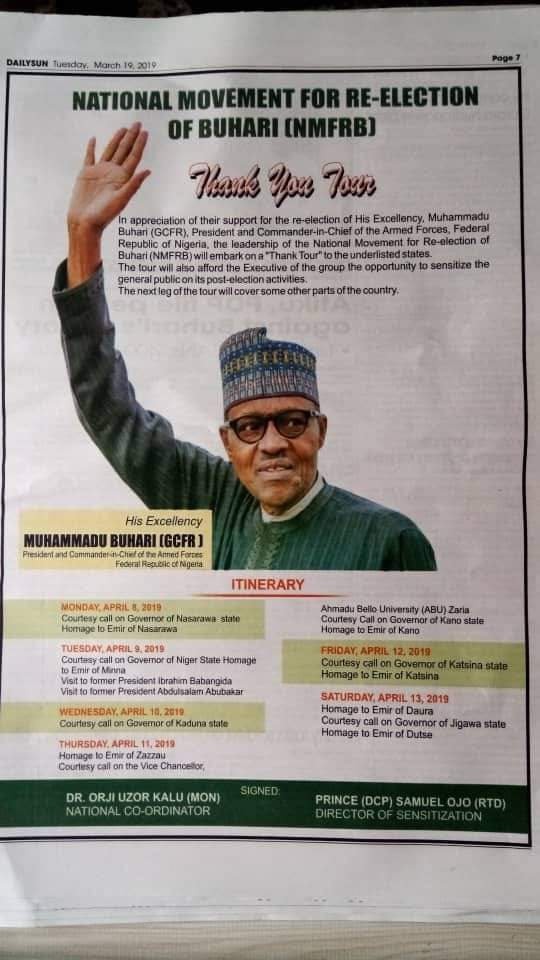 Recall that we have been publishing the various calls for the Senate Presidency to be zoned to the South East with about 98 per cent of these groups and individuals drumming support for, and tipping former Governor of Abia State and Senator-elect, Dr. Orji Uzor Kalu for the position.

For instance, speaking in an interview with newsmen on Sunday, Chris Ngige, the Minister of Labour and Employment, said he supports the call for the Senate President position to be zoned to the South East.

He said that Kalu is fully qualified for the position and should be considered by his party, the All Progressives Congress (APC).

“We have someone that is ranking from the South East. We have Dr. Orji Uzor Kalu. He was a legislator in the Federal House of Representatives during the military regime, it’s counted, because it was a National Assembly, so he has got some ranking.

“Therefore, Orji Uzor Kalu is qualified to be the next Senate President,” Ngige said….

Blackface Finally Reveals Why He Choose To Diss On 2baba