Controversial Activist, Charles Oputa (aka) Charly Boy has finally reacted to the resignation of his partner and fellow activist, Deji Adeyanju from a civil society organization(CSO) they both founded, ‘Our Mumu Don Do’.

Deji Adeyanju had earlier today announced withdrawal of his membership from the organization.

He accused the co-founder of the movement, Charles Oputa (aka) Charly Boy, of betraying him.

“I have resigned my membership of Our Mumu Don. I no longer have confidence in the leader of the movement, Charly Boy. He betrayed the cause while I was away in prison and compromised with the oppressors. Thank you. 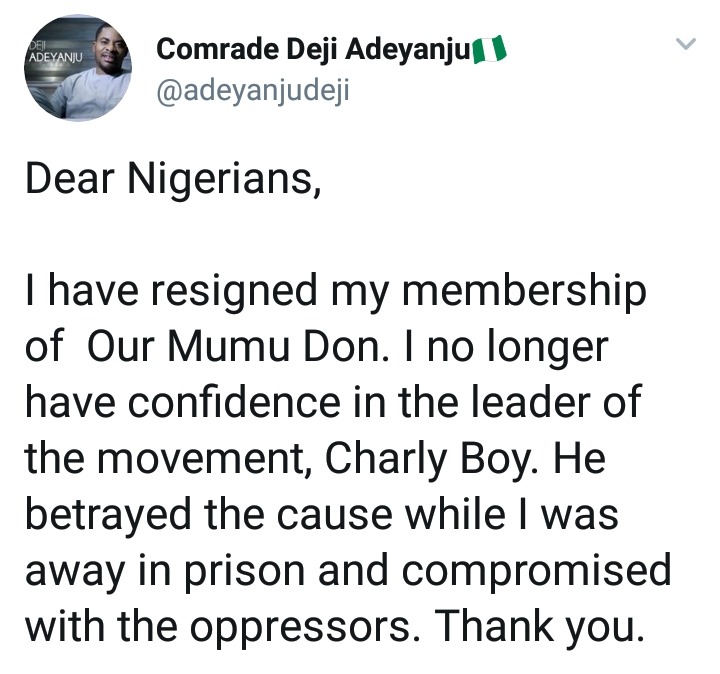 However, when reached for a comment on the development, Charlyboy simply told our reporter, “Story, Stoory, Stoooory”, a popular statement made in Nigeria to dispel a story as ‘false’.

He declined to make any further comments.

2023: Northerner will be President for another 8yrs after Buhari – Deji Adeyanju

Finally, Deji Adeyanju Reveals who made Peace between him and Nnamdi Kanu

I was ‘heavily paid’ by Buhari to criticize Atiku — Charly Boy

Got Any News Or Advert For Us? Email us: Info@abacityblog.com WhatsApp https://wa.me/2347038111972
Tags: Charly BoyComrade Deji AdeyanjuOur Mumu Don Do
Share13Tweet8Send

An Imo State Magistrate Court, has convicted a 20-year old school leaver, Peter Nwoke, for being the mastermind of a...

You're the "Judas" of the East - Fani-Kayode blasts Okorocha