You’re the “Judas” of the East – Fani-Kayode blasts Okorocha

You're the "Judas" of the East - Fani-Kayode blasts Okorocha

Femi Fani-Kayode, a former aviation minister has referred to Imo governor, Rochas Okorocha as a useful idiot and the Judas of the south-east.

Fani-Kayode, a chieftain of the Peoples Democratic Party (PDP) was reacting to a video recording of Okorocha,. which is trending where he complained of military interference in the elections.

Fani-Kayode, who reacted to the video via his Twitter handle referred to the governor as a useful idiot speaking against those he helped put in power.

“Listen to this useful idiot and accursed slave speaking against those he helped put in power. He is the Judas of the east and one of the three biggest traitors of the south. May the Lord pay him according to his works,” he tweeted. 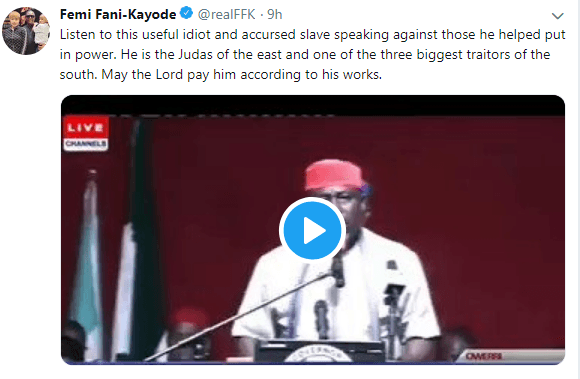 Okorocha was speaking on the backdrop of the loss of his ‘anointed candidate’ Uche Nwosu in the governorship election, which was won by Emeka Ihedioha, a former deputy speaker of the House of Representatives.

VIDEO: Masquerade spotted on the Streets Preaching the Gospel of Jesus Christ

Got Any News Or Advert For Us? Email us: [email protected] WhatsApp https://wa.me/2347038111972
Tags: #OffbeatFani-KayodeRochas Okorocha
Share14Tweet9Send
Next Post