The All Progressive Congress, APC, supporters

As the race for the presidential election hit up. Many reports of one party who has a better chance of winning in one particular zone across top geopolitical area in Nigeria have been making rounds online.

However, recent reports from Ballard partners, an international company hired by PDP to evaluate and determine pdp chance of winning by asking indigenes in certain areas in the country random question about their view on the current government and the candidate they will most likely vote for in the forthcoming general election shows that the incumbent president has a far better chance of retaining his position as the national Head.

Undecideds are at 4% and all other will score a total of 3%. This leave Atiku Abubakar, the presidential candidate for pdp and his team with more than enough work to do.

Below is the overall report sent to Bukola Saraki, the People’s Democratic party chief host and the senate president of Nigeria. 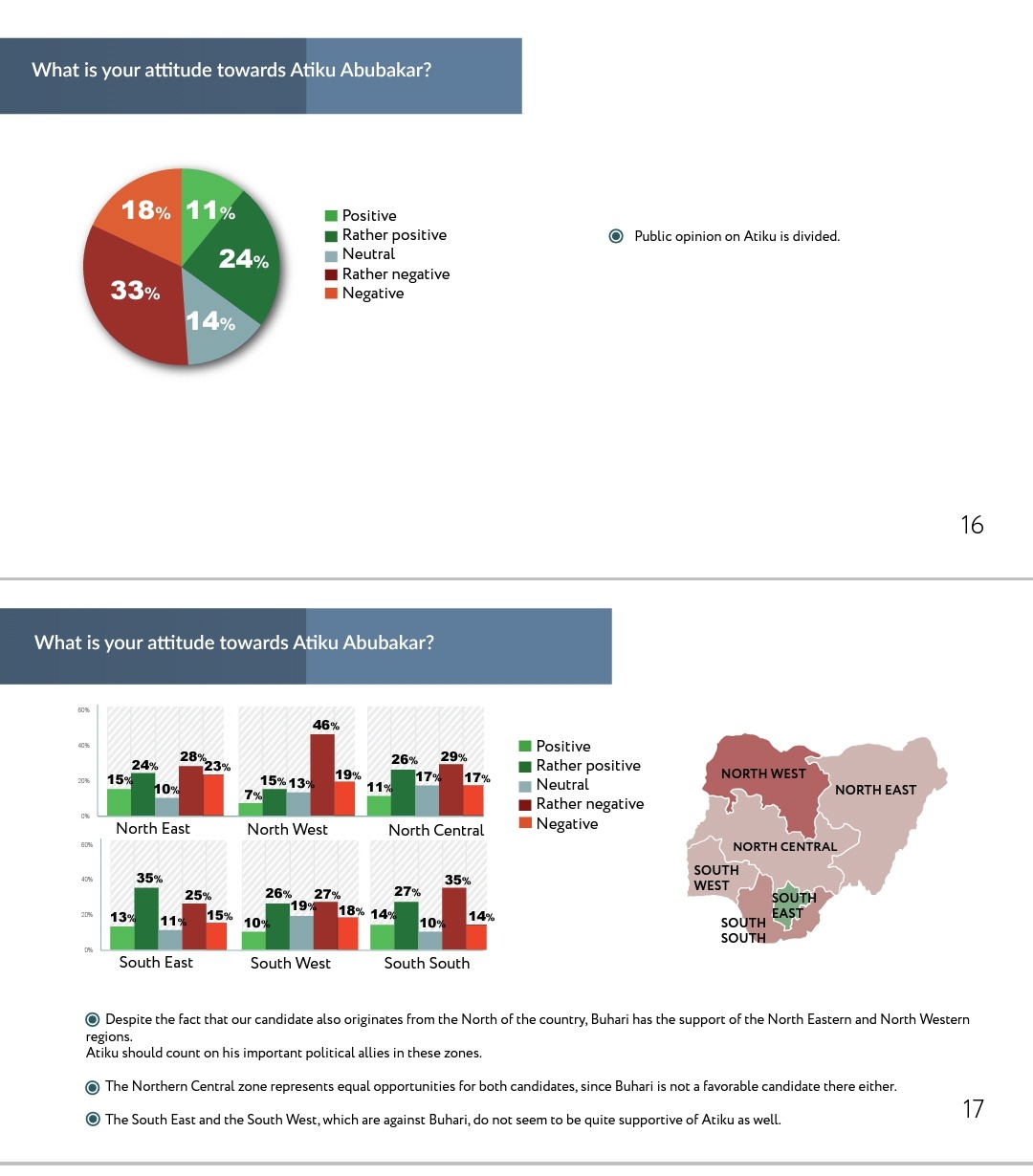 2). Voters generally approve of how Buhari has been handling his job and
have positive view towards him.

3). Voters generally do not like Atiku because
of the corruption issues around him. Poor for Buhari, middle class for Atiku –
but poor are the majority.

4). Many people are disappointed with the choice they have: 19% of PVC
holders said they don’t see the reason to vote.

6). About 87% of APC supporters endorse Buhari, but only 71% of PDP supporters
endorse Atiku.

7). South-South and South-East which were supposed to be the Atiku’s
regional strongholds, are not as much negative towards Buhari as where
expected. 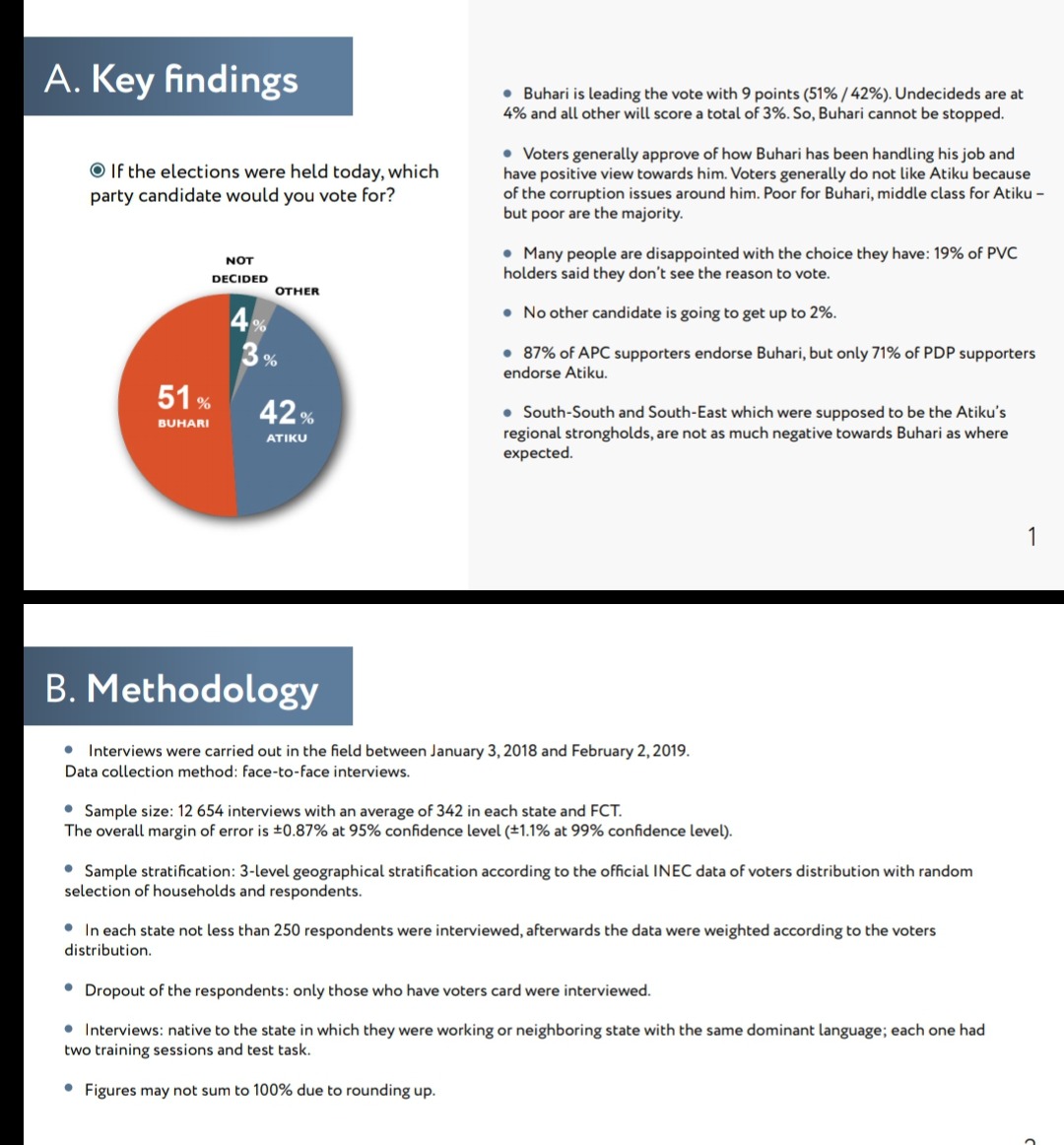 1). Interviews were carried out in the field between January 3, 2018 and February 2, 2019.
Data collection method: face-to-face interviews.

4). Sample stratification: 3-level geographical stratification according to the official INEC data of voters distribution with random
selection of households and respondents.

5). In each state not less than 250 respondents were interviewed, afterwards the data were weighted according to the voters
distribution. 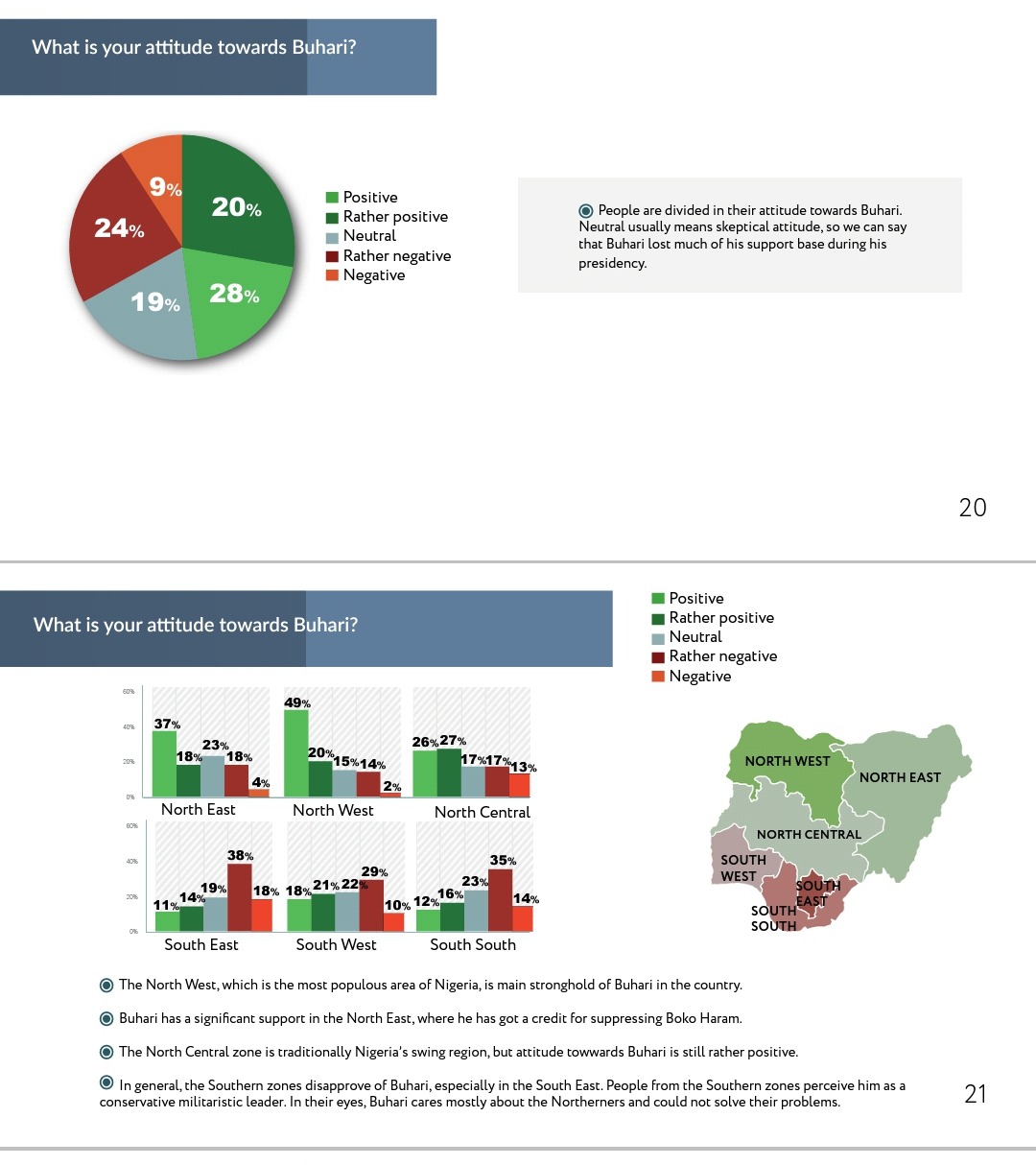 6). Dropout of the respondents: only those who have voters card were interviewed.

7). Interviews: native to the state in which they were working or neighboring state with the same dominant language; each one had
two training sessions and test task.

2023: Northerner will be President for another 8yrs after Buhari – Deji Adeyanju

Activist and Convener of Concerned Nigerians, Deji Adeyanju, on Thursday said a northerner will be president of Nigeria for another...

I regret criticising Goodluck Jonathan, he was a good President – Ali Ndume

2023: Igbo presidency can only be achieved if engage with the North – Ike Ekweremadu

Former Deputy Senate President, Ike Ekweremadu, has said that the Igbo presidency can only be achieved in 2023 if the...

Please Give Us Election, Not Selection – Senator Begs INEC