Reno Omokri, has said that the president has decived the poor masses in Nigeria that he’ll equalise poverty, but under Buhari Wealth is Evil, he said.

In a recent tweet by the aide to the Ex-president, Good luck Jonathan, he said:

“What Buhari has done is weaponise the envy of the poor for the wealth of the rich. He has deceived the poor masses that he will equalise poverty.”

“So instead of bringing them up to the level of the rich, he will bring the rich down to their level. Under Buhari, wealth is evil!”

Speaking of the forces deployed to Benue and Zamfara state for election by the federal government, Reno said: 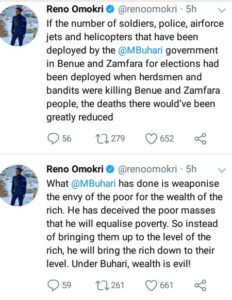 Got Any News Or Advert For Us? Email us: Info@abacityblog.com WhatsApp https://wa.me/7038111972
Tags: President Muhammadu BuhariReno Omokri
Share12Tweet7Send

#ENDSARS: ‘You have made your point, end Protest now’ – Tinubu tells Protesters

Coach Losses His Job After Having Sex With His Players Wife