25
SHARES
110
VIEWS
Share on FacebookShare on TwitterShare on Whatsapp

The leader of Indigenous People of Biafra, IPOB, Mazi Nnamdi Kanu, has reacted to the suspension of the proposed  Rural Grazing Areas (RUGA) settlements for the Fulani herdsmen.

The administration of President Muhammadu Buhari had suggested and began the project nationwide with stakeholders not carried along. He said the initiative will bring a permanent end to herders and farmers clashes across Nigeria.

Although it is said to be optional for interested states, the implementation of the projects in some states that rejected it fuelled speculations that the government was being economical with the truth.

Those who rejected the move accused the federal government of spreading land grabbing for the benefit of the Fulani tribe.

Reacting to the suspension of the project, Kanu hailed the members of IPOB for speaking against the project, especially, when it was reported that it will include Southeastern region.

Kanu said; “As Jubril/the Cabal bows to pressure and SUSPEND implementation of their #RUGA, let me salute #IPOB worldwide which took a principled stand and fired the FIRST salvo against this evident Fulanization agenda. Better yet, RUGA or not, a #referendum on Biafra restoration is NEXT”. 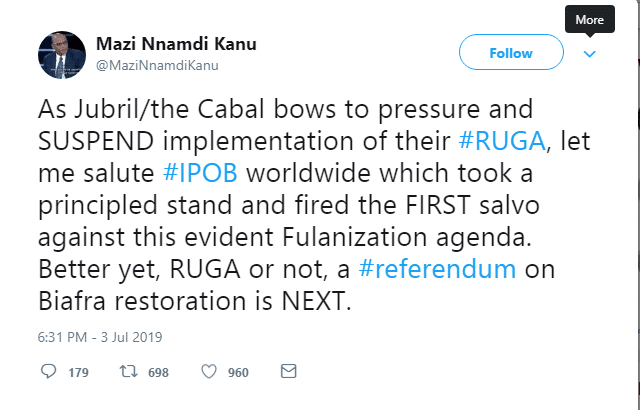 Got Any News Or Advert For Us? WhatsApp https://wa.me/7038111972
Tags: Nnamdi KanuNnnamdi Kanu on RUGARuga settlement in any part of the South-East
Share10Tweet6Send

Biafra: Where Is Kanu’s ‘Signed, Sealed And Delivered’ Document?

Enugu Killings: I Felt Like Abandoning The Struggle For Biafra – Nnamdi Kanu lament

Biafra: What Ojukwu’s Wife, Bianca Said Over Killings Of IPOB Members In Enugu

RUGA? Man shares video of parts of Ebonyi State where Fulani herdsmen have taken over