Commercial and economic activities were Thursday, totally grounded in Abia State particularly Aba the commercial capital , in what appears to be total compliance with the sit-at-home order issued by the Indigenous Peoples of Biafra, IPOB.

Major markets in Aba were under lock and key as both traders and buyers all stayed away. The roads were also deserted as residents remained indoors. Motor parks in Aba were ghosts of themselves as passengers were no where to be seen while the few that showed up got stranded.

There was substantial compliance in Umuahia the state capital as some residents later in the day opened for business unlike Aba where the exercise recorded near -perfect compliance.

Banks and schools in Aba were all shut down as they refused to open for business.

In Aba also, school children were seen in their various homes and streets playing and having fun among themselves, as their schools were all deserted with no teachers seen within the school premises.

In Umuahia however, while some schools (public) were open others particularly private schools asked their pupils and staff to stay at home. Until around midday commercial activities in parts of Umuahia were at a low ebb.

A visit to the popular Shopping Centre Market (Eke-Oha), Aba, revealed that major entrances into the market were under lock and key with no traders or buyers in sight.

The situation was same at the Jubilee Road Spare Parts Market and Saint Michael’s Road Phone and Computer Accessories market, as the dealers did also not show up.

At the Ariaria International Market, Cemetery Market and Ahia-Ohuru there was total compliance as everywhere was completely deserted. 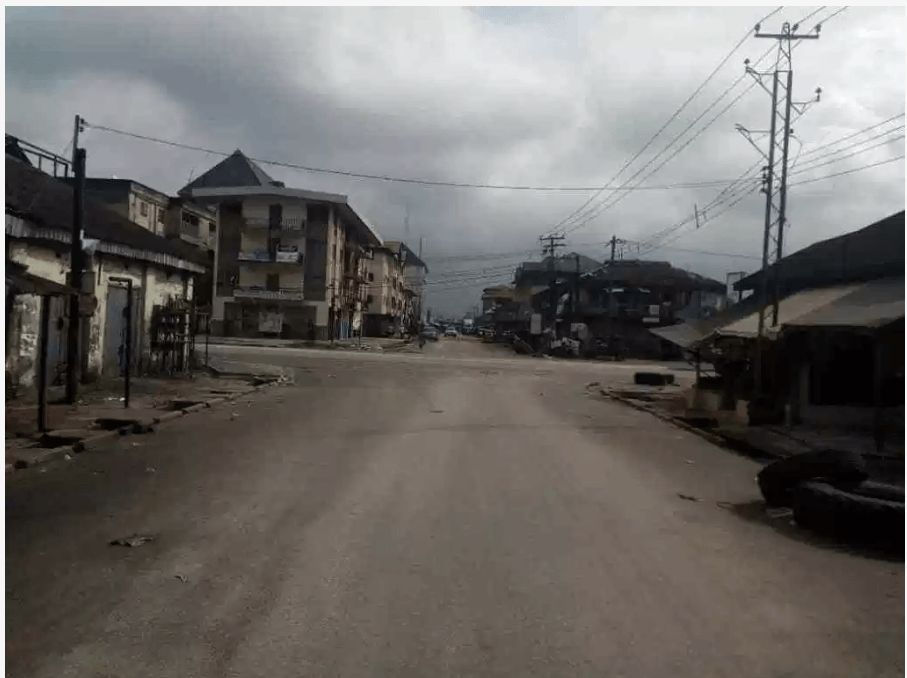 According to reports, some bars and eateries located deep inside some minor streets in Aba that opened for business had to close shops later as there were no customers to patronise them.

However joint police and army patrol was observed in a long convoy parading the major streets of Umuahia and Aba. There were no incidents of violence or any clash with the security agents as at the time of filing this report.

Meanwhile, IPOB has congratulated residents of South South and South East geopolitical zones as well as Biafrans in other parts of the country for near -perfect compliance with the sit-at-home order.

IPOB in a statement signed by its Media and Publicity Secretary, Emma Powerful, said the total compliance with the order was an indication that Biafra restoration was the common agenda of the people.

The statement read in part: “Any lingering doubt that IPOB is in complete charge of the entire Biafraland has been dispelled by the level of high conpliance with the sit-at-home directive issued by the leadership of our great movement.

“Indications from all quarters point to total compliance across board including Yenegoa Bayelsa State. We expected our people to comply but never did we anticipate this near perfect compliance. The respect and humility Biafrans demonstrated today is an indication that Biafra restoration is the singular most important issue in the lives of our people.

“If this level of solidarity with the direction and philosophy of IPOB leadership is sustained in the coming months, the feared Fulanisation agenda of Aso Rock will be successfully repelled.

“We encourage our people to remain steadfast and not allow themselves to be intimidated into disrespecting our war hearoes by venturing outside. Today is a truly historic day, our dead soldiers will be proud of us.

Obiora Agbasimalo: A Quintessential Humanitarian And An Advocate Of A Cleaner City

Photos from the funeral of Iniubong Umoren, job seeker who was raped and killed in Akwa Ibom

Why Enterprise Blockchain Investing Is a Big Deal Right Now

VIDEO: We Are Working Hard Against Bandits To Go Back To Their Land – Buhari

Why Buhari refused to give inaugural speech

VIDEO: The Moment Church Members Were Seen Flogging Poverty Out Of Their Lives [WATCH]