VIDEO: My Mom Gave me Rat Poison to put In my Father’s Food – Girl Confesses

VIDEO: Masquerade spotted on the Streets Preaching the Gospel of Jesus Christ

“Language or dialect should not be a barrier or a stumble stone (if there is an interpreter) especially, when it comes to business. However, in this part of the world, we likely see such as “incompetence”.

A business man, Mr. Aniagboso Christopher, have narrated to ABACITYBLOG how he was refused on-board Air Peace (a private Nigerian airline) from Lagos to Owerri.

Mr. Aniagboso, told our reporter how the incident happened. Although, to him, it was strange and unacceptable, hence he called for media report.

“It was strange to me”, says Aniagboso. “On 12th May, 2019, I was heading back to Owerri from Lagos, to attend to my business associates. As usual, I decided to board flight for fast travel. I bought an Air Peace ticket with hope that I will board their flight.

“I was already at the Murtala Muhammed Airport waiting to board, as my flight time is already ticking. I checked in for Air Peace flight, unfortunately, I received a call from a business associate, while on a phone call, I noticed that my flight time have passed, I hurried back, asked about my flight following the time on my ticket, I was told it has left.

“I felt sad and disappointed, I decided to meet the ticket department to table my case, they said I should pay extra N7,200 to enable me to join another flight. I did pay the money, but something happened, while I boarded the flight, relaxed in my seat, the Airplane attendance began announcement, I called her close and told her that I couldn’t understand what she was saying. She called her colleague to help interpret (English to Igbo).

“I asked the person if she is an Igbo, she said yes! I told her to help me interpret everything her colleague said, she told me that she can’t interpret it. It was Igbo people who boarded the flight with me that helped me to interpret it.

But after the announcement, I saw some moves, I decided to get up from my seat and sat in another, the one behind the exit.

They told me that since I don’t understand English, I shouldn’t sit on the seat near the exit door should there be need to use the exit door during an emergency.

“While, argument was ongoing, information came that the pilot said he can’t allow me onboard, adding that I should come down, else, he won’t take off.

“I didn’t argue with them, rather, I came down and again, move straight to the ticket department, I asked them if there is any other flight I should board since the pilot said he can’t take off, if I am on-board.

The receptionist told me that none of their flight is available unless I’ll wait the next day, but I will pay another extra N3,200. I was annoyed and I said, whatever the cost may be, I will pay. Adding that I have no case with them but the management.

On the process of making the payment, the department manager gave order that they can’t allow me board their flight.

The manager further told me that I should go ahead and do whatever I want, adding that they will be ready to meet me in court If I wish.

Finally, I left Air Peace and someone directed me to Arik Air, where I boarded flight and instead of my initial destination, the plane landed in Port Harcourt, Rivers State, where I took an airport taxi to Owerri, Imo State.

“What happened to me was terrible and a long story but I had to cut it short, Mr. Aniagboso told our reporter.

He further, noted that he has already bought a returning ticket from Air Peace but he won’t be able to use them again.

BELOW ARE THE AIR TICKETS: 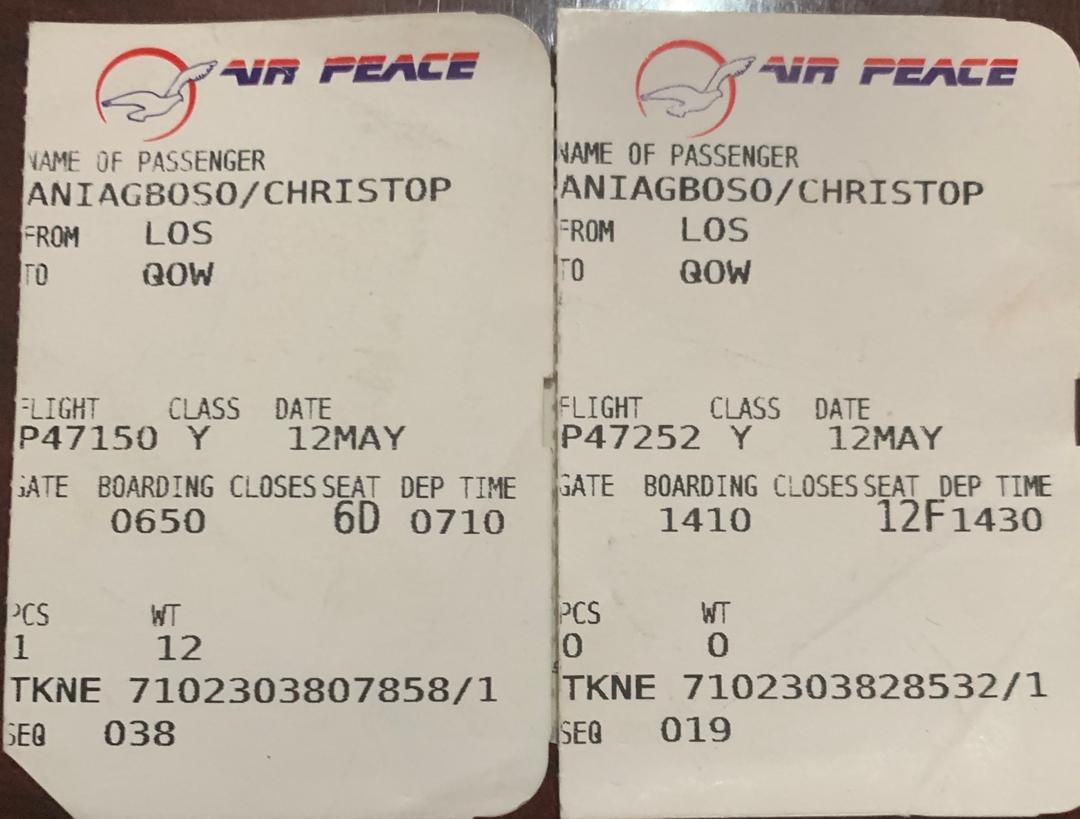