However, Nigerians who do not understand the meaning of the word; “Writ of FiFa”, have taken to social media to ask what it does really mean.

Some find it difficult to understand, while others find it weird as such word can only be understood by legal practitioners.

To make it clear and easy to comprehend, a legal practitioner and human rights activist, Mr. Seth Tanko Tsokwa, has taken his time to explain to his followers what the word really means.

He wrote; “For those asking for explanation: @innosonvehicles won a court case against @gtbank and GTB was ordered to pay innoson about 2Billion naira, with a 22% annual interest. Rather than just pay, GTB appealed the decision and lost at the court of appeal. Instead of paying they decided…

“to appeal further to the Supreme court. Meanwhile the interest kept pilling up. GTB lost again at the Supreme court. And no more appeal! Now what the owe innoson has risen from about 2Billion to 8billion plus. Apparently GTB has still not paid. The lawyers to innoson have…

“applied for a writ of Fifa, what this means is that once obtained they would have the authority to seize and take over any property belonging to GTB they find which is sufficient to defray the sum owed Innoson. 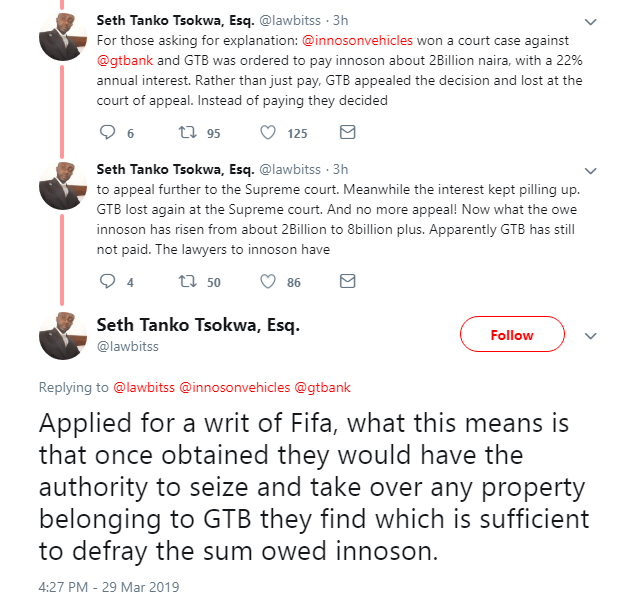 Innoson’s IVM Cruise Launched In The City Of Enugu

Elon Musk, the chief executive of Tesla and SpaceX, is now the richest person in the world, New York Times...

The United Kingdom has reacted over the allegation leveled against a former Nigerian Head of State, Yakubu Gowon, by a...

Biafra: Rehabilitation of Internally Displaced Ibolites in the West and North of Nigeria