A letter allegedly written by the Abia State governor, Dr. Okezie Ikpeazu over the redeployment of the State commissioner of Police Ene Okon has surfaced online.

In the letter, Governor Ikpeazu pleaded with the Police IG, Adamu Muhammed to bring back the redeployed Police Commissioner, Ene Okon, who was removed over Police Extra-juducial killings in the Abia State.

In the letter published by AFNews, the governor also accused the 2019 APGA governorship flag bearer, Dr. Alex Otti of sponsoring the secessionist group, the IPOB.

Read the letter below… 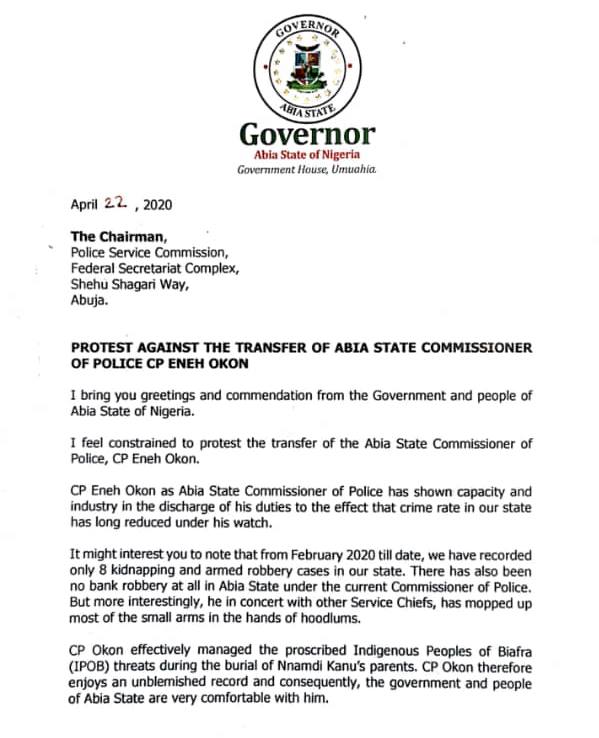 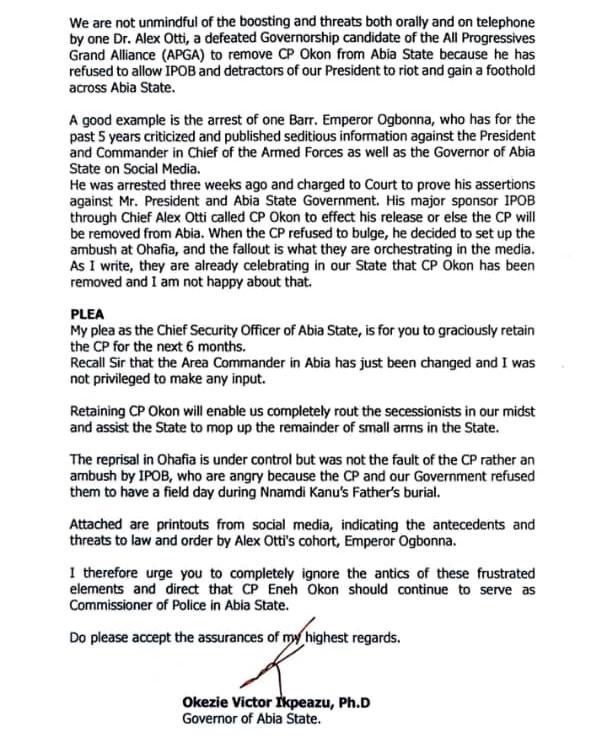 In the above letter which, the governor accused Dr. Alex Otti OFR of being behind the moves to remove CP Ene Okon because the CP refused to set free Barrister Emperor Ogbonna who the governor claims is an ally to Otti that has kept attacking him and President Muhammadu Buhari.

In the same letter purportedly written by the governor, he also stated that the move to remove CP Ene Okon was because he refused to allow IPOB which is sponsored by Otti gain ground in Abia state.

Meanwhile, Otti reacted through his media aide Ferdinand Ekeoma. He accused Governor Okezie Ikpeazu of trying to incite the Federal government against a peace loving Abian, Alex Otti, whose only crime is his consistent intervention in demanding for good governance in Abia State.

Carefully read this letter he personally signed and sent to the Police Service Commission protesting the removal of the former Abia state Commissioner of Police and calling for his return to Abia.

1. As usual, he accused his nemesis Alex Otti of being behind the removal of the CP.
While Abians of all classes mourned the death of innocent Abians who were gruesomely murdered by some trigger-happy security agents, Ikpeazu kept mute and aligned with those behind the murder because the lives of the dead meant nothing to him.

2.To incite the Federal government against a peace loving Abian, Alex Otti, whose only crime is his consistent intervention in demanding for good governance in Abia, Ikpeazu accused Otti of sponsoring IPOB.

3.Even when the police had openly admitted that their men were behind the latest murder of the 17 year old boy in Ohafia and that the police men acted under the influence of alcohol, Ikpeazu chose to pursue ungodly interest over the life of an innocent citizen by claiming that it was IPOB that carried out the murder and that it was Otti that sponsored them.

4. Abians can now see why Ikpeazu continued to issue cosmetic press releases after every murder without initiating any serious action aimed at stopping future occurrence.

6. Let it be clearly stated that even though Alex Otti does not know Barr. Empero Ogbonna and has never met him in his life, Otti will never fail to intervene to ensure that any Abian being unjustly oppressed is set free from the despicable grips of Ikpeazu, his godfathers and agents, that is what Otti is doing in the case of Ogbonna, just like he had done for other innocent citizens. He doesn’t need to know you before lending a helping hand where and when necessary.

7. By trying to fraudulently incite the federal government against Otti without justifiable reasons, Ikpeazu clearly manifested himself as someone who is afraid of fighting his own battles which he knows are unjust and ungodly.
Gladly, the federal government through the Police Service Commission are smarter and cannot be fooled by Ikpeazu.

8.From the content of the letter vis-a-vis the lies of desperation, manipulation, selfishness, distortion and insensitivity manifested thereof, one does not need a soothsayer to understand that Ikpeazu represents Bitterness and Viciousness put together. Ikpeazu went to the extreme against Otti and millions of Abians, yet he failed woefully.

9. Finally, it must be clearly stated that even though Alex Otti has repeatedly been a victim of vicious state sponsored blackmail and violence, it doesn’t take away the fact that Alex Otti is a peace loving man who has never indulged or sponsored any act of violence in Abia or elsewhere. Otti detests blackmail and thus can never sponsor blackmail against anyone. However, Alex Otti believes in democracy, rule of law and constitutionalism, and thus expects every citizen who feels defamed in any form to seek legal redress devoid of vindictive and wicked political manipulation against such citizens.

Meanwhile, the Abia State government are yet to respond to the letter.

For your own safety, cancel the planned Protest – Ikpeazu tells Group

Abia: Lawmakers will not be Distracted by Malicious Propaganda – Group

Got Any News Or Advert For Us? Email us: [email protected] WhatsApp https://wa.me/2347038111972
Tags: Abia StateAlex OttiGovernor Okezie IkpeazuIPOB
Share18Tweet12Send
Next Post

Igbere TV Boss to Drag Gov. Umahi to Court Over Harassment of Journalists