Full Speech Of Hon. Benjamin Kanu at unveiling of “The Green Chamber Magazine”

by Ngozi Blessed
in Aba News
0

26
SHARES
113
VIEWS
Share on FacebookShare on TwitterShare on Whatsapp

ABACITYBLOG has obtained the full address of Hon. Benjamin Kalu, Chairman of the House Committee on Media and Public Affairs, which he gave during the Unveiling of the maiden edition of “The Green Chamber Magazine”.

Hon. Kalu, representing Bende federal constituency who doubles as the mouthpiece of the 9th House of Reps, has finally launched the most anticipated magazine.

During the unveiling of the magazine which was attended by many dignitaries, Hon. Kalu, noted that “The Green Chamber Magazine” will address several misconceptions about The House operations, duties and achievements abounded in the public domain propagated by mischief makers and fuelled by commercialized news reportage as well as acute ignorance of the workings of the legislature.

He further added that the Magazine will report all activities of the House, including the progress of deliberated bills, motions and petitions.

Read the full address below…

OFFICE OF THE OFFICIAL SPOKESPERSON
HOUSE OF REPRESENTATIVES

Address of the Chairman of the House Committee on Media and Public Affairs at the Unveiling of the Green Chamber Magazine held on Wednesday, February 19, 2020 at the National Assembly Complex.

In paragraph 14 of Self Reliance, one of the most remarkable essays of the 19th century, Philosopher Ralph Emerson argued, “Is it so bad to be misunderstood? Pythagoras was misunderstood, and Socrates, and Jesus, and Luther, and Copernicus, and Galileo, and Newton, and every pure and wise spirit that ever took flesh. To be great is to be misunderstood.”

Beautiful as the postulation sounds, we cannot afford the luxury of such romanticism.

If not for the fact that half of those great people met their untimely end at the very hands of those who misunderstood them, then for the fact that as elected representatives, the eyes and the ears of the common man and the closest arm of government to the grassroots, we remain directly accountable to Nigerians for the workings, successes and failures of government. We cannot afford to be misunderstood.

The 9th House of Representatives was inaugurated at a time when the image of the parliament needed an overhaul. Several misconceptions about its operations, duties and achievements abounded in the public domain propagated by mischief makers and fuelled by commercialized news reportage as well as acute ignorance of the workings of the legislature. The legislature was expected to exist in perpetual acrimony with the executive by the very same people who stood to be disadvantaged by such discordant governance.

Nigerians were conditioned to appraise the National Assembly with the same terms of reference as they would the Executive without regard to the distinctive nature of legislative duties under the 1999 Constitution, thereby engendering a deep-seated scepticism about the legislature’s commitment to national development.

In view of these image challenges, the 9th House under the leadership of the Speaker, Rep. Femi Gbajabiamila, committed to a transparent and demystified House in its Legislative Agenda.

In political studies, we are taught that transparency, an important concept in a democratic republic is of two forms; reactive disclosure (as the Freedom of Information Act envisages) and more importantly, proactive disclosure, which is what we have accomplished today, with the Green Chamber Magazine. We have chosen this proactive route as a clear demonstration to Nigerians and the international community of our commitment to the highest standards of accountability to our constituents.

This publication marks the first of such effort by the House of Representatives in the history of Nigerian democracy and we are proud of it.

As a tool of transparency, the Green Chamber Magazine will report all activities of the House, including the progress of deliberated bills, motions and petitions. It will also publish articles and opinions of civil society organizations, non-governmental organizations and various other stakeholders in legislative affairs ensuring that Nigerians become real partners in our democracy and progress.

As a tool of accountability, it will report any form of corruption and inefficiency in the executive which are exposed by the House in furtherance of our constitutional duty of oversight enshrined in Sections 88 and 89 of the Constitution of the Federal Republic of Nigeria.

This masterpiece did not come without great sacrifice, and therefore, I thank everyone who contributed to the successful production of the maiden edition of the Green Chamber Magazine. My profound gratitude goes to the Speaker of the House of Representatives, Rep. Femi Gbajabiamila, whose support was palpable and evident in his actions throughout the production of this magazine. I also thank the Deputy Speaker, Rep. Ahmed Idris Wase and the leadership of the House for their support. 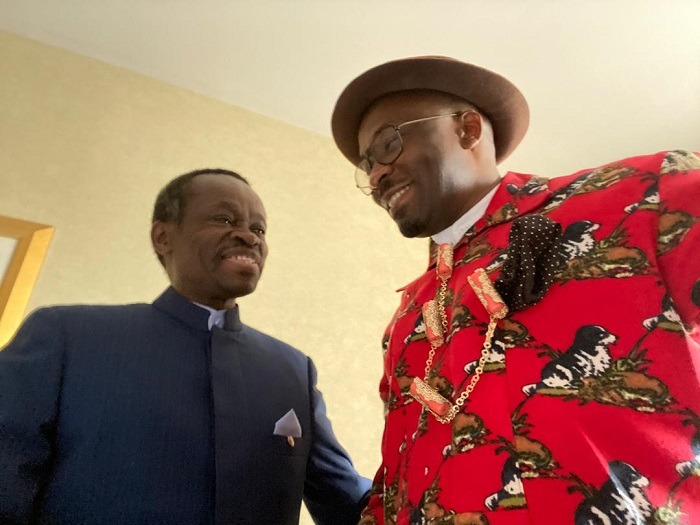 I especially want to thank all the members of the House Committee on Media and Public Affairs for validating the confidence reposed in us by the Speaker when he handpicked us to do the work of promoting the image of the House.

I would be remiss if I failed to acknowledge the consultant to the Committee on Media and Public Affairs, Mrs. Love Idoko-Uloko and her organization, Dreams Pointer Limited, for their excellence and tireless effort to ensure the success of the magazine and this event. My gratitude also goes to our first advertisers, for partnering with us in this mission for transparency and to the writers and editorial team for their brilliant
contributions.

Distinguished guests, ladies and gentlemen, thank you for honouring our invitation today; and while urging everyone to get copies of the Green Chamber Magazine, permit me to reinforce that the mere purchase of this magazine constitutes an act of partnership with the legislature to engender transparency in governance.

Finally, it was Maya Angelou who once said, “There is no greater agony than bearing an untold story inside you.” By this magazine, we venture to tell our stories ourselves, so that in judging us, posterity may observe the principle of natural justice, audi alteram partem (let both parties be heard).

Got Any News Or Advert For Us? Send It via Email Info@abacityblog.com || Or WhatsApp https://wa.me/7038111972
Tags: Benjamin KaluHouse Of RepresentativesThe Green Chamber Magazine
Share10Tweet7Send
Previous Post

Okorocha: Igbo Responsibilities Have Fallen on Orji Kalu and Myself

Buhari is Dead Nnamdi Kanu Insists; Reveals names of those who allegedly brought in Jubril Al-Sudani

Protesters Against Orji And Sons Are Miscreants And Non-Abians, says COSEYL