26
SHARES
115
VIEWS
Share on FacebookShare on TwitterShare on Whatsapp

Deji Adeyanju, a human right activist has dug up a video of former President Olusegun Obasanjo chastising the OPC the moment they started constituting crisis in the South Western part of the country.

According to the video, Obasanjo can be seen in a media chat, giving direct orders to security operatives to shoot OPC members at sight if any of them refused arrest.

This video has surfaced as a result of the current security challenges in the country and how the Mr President is going about it.

Recall that former President Olusegun Obasanjo had written to President Muhammadu Buhari to expedite actions on the state of insecurity in Nigeria.

The Former President, in an open Letter to President Muhammadu Buhari warned that actions must be taken to prevent issues that may lead to genocide.

However, Deji Adeyanju who dug out the video, is asking why President Buhari is shielding Fulani herdsmen despite several reports of their killings/attacks in different parts of the country. 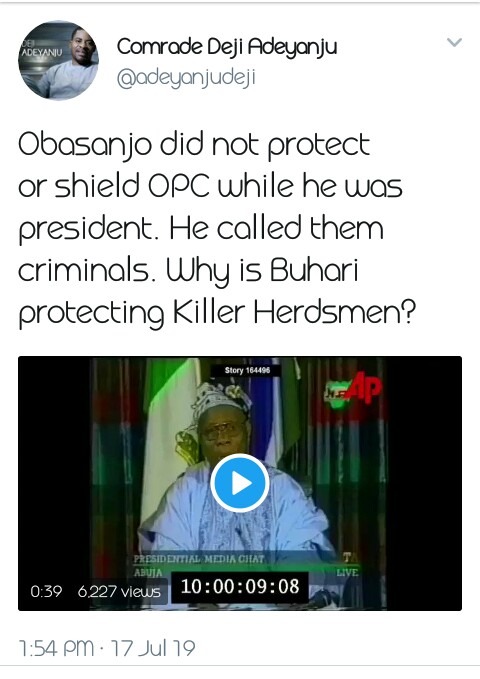 Got Any News Or Advert For Us? WhatsApp https://wa.me/7038111972
Tags: Olusegun ObasanjoPresident Muhammadu Buhari
Share10Tweet7Send

Nigeria has never been united. It didn’t start under Buhari – Femi Adesina

Unless Buhari retraces his steps, there will be no Nigeria left by 2023 – Fani-Kayode

Why Africa needs leaders with the spirit of Mandela - Kalu

These 6 Nigerian Igbo Women Are Making The Country Proud