by Abacity Admin
in Coronavirus
0

United States President, Donald Trump has sent a letter to the World Health Organisation (WHO) threatening to pull U.S. funding permanently from the organisation over its poor response to COVID-19.

The letter outlines a 30-day deadline for the body to commit to “substantive improvements” or risk losing millions of U.S. dollars and membership altogether.

Addressed to WHO Director General, Tedros Adhanom Ghebreyesus, it criticised the stages of the body’s response to COVID-19 since December 2019.

Trump published the letter on Twitter last Monday, following a day of heavy U.S. criticism of the health agency.

Buhari and Trump Are the Same But Difference Is One Can Use Twitter, Says Wizkid

This is the letter sent to Dr. Tedros of the World Health Organization. It is self-explanatory! pic.twitter.com/pF2kzPUpDv

In his letter the U.S. President accused WHO of having an “alarming lack of independence” from China.

Trump called for the organisation to commit to “major substantive improvements” within 30 days, without clarifying what this means.

Without these changes, the president said, the U.S. will make its temporary freeze of funding permanent and “reconsider our membership in the organisation.”

Among his assertions, Trump accused the agency of having “consistently ignored” what he describes as “credible reports” of the virus spreading in Wuhan at the start of December or even earlier. The U.S. president has repeatedly accused China of failings in its response to the coronavirus outbreak.

In the letter, Trump cited reports that WHO delayed an emergency declaration under pressure from President Xi Jinping, and criticised the agency’s praise of China’s “transparency” amid its censorship and lack of international co-operation. Trump accused WHO of failing to comment on virus-related discrimination against Africans within China and said Dr. Tedros could have saved “many lives” if he had acted more like Dr. Harlem Brundtland, the WHO chief during the Sars outbreak of 2003.

Read the letter below… 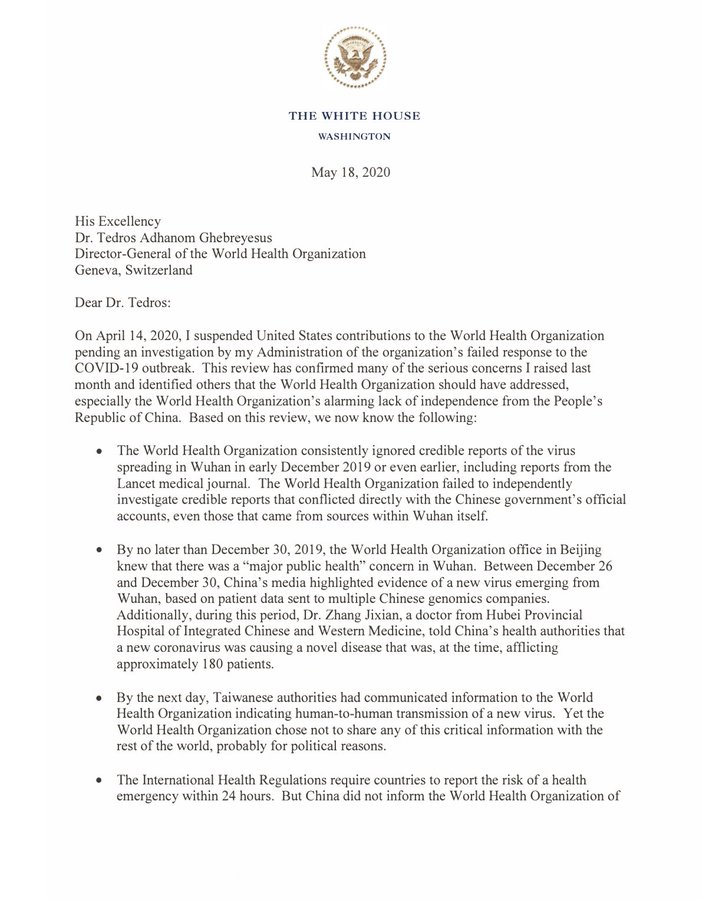 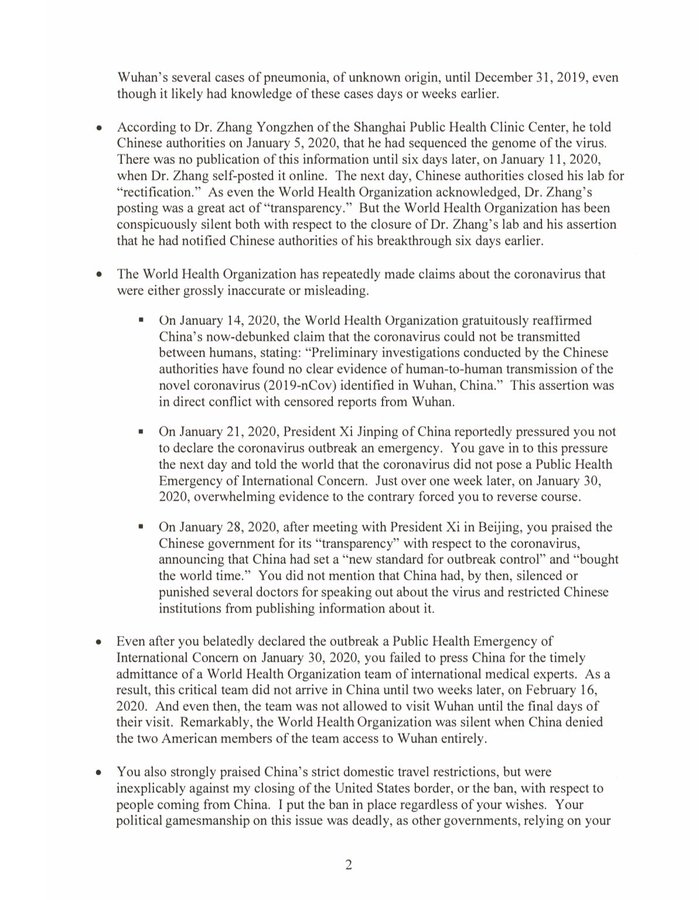 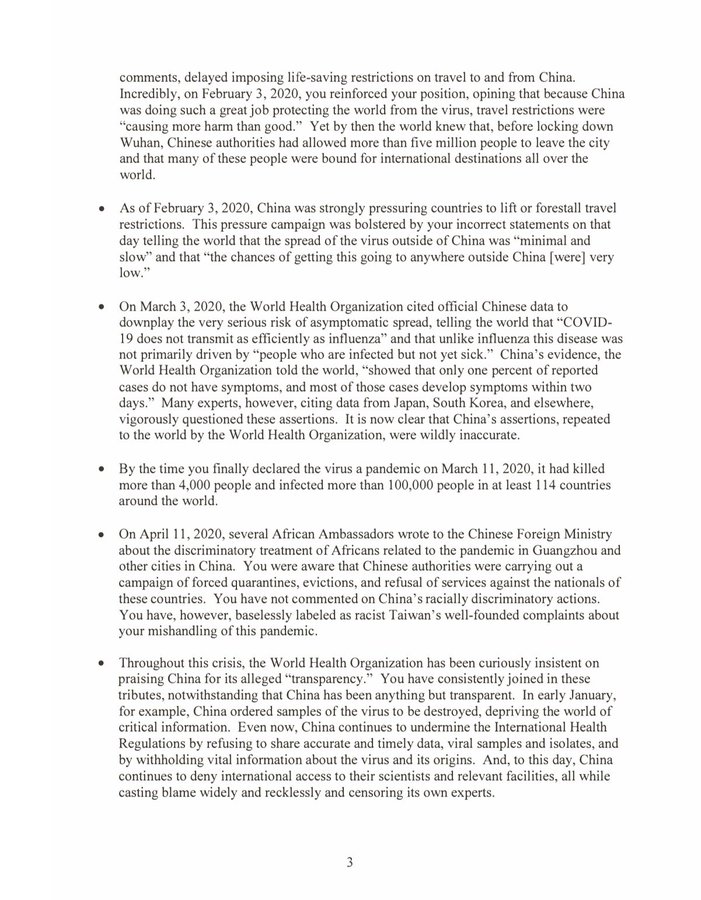 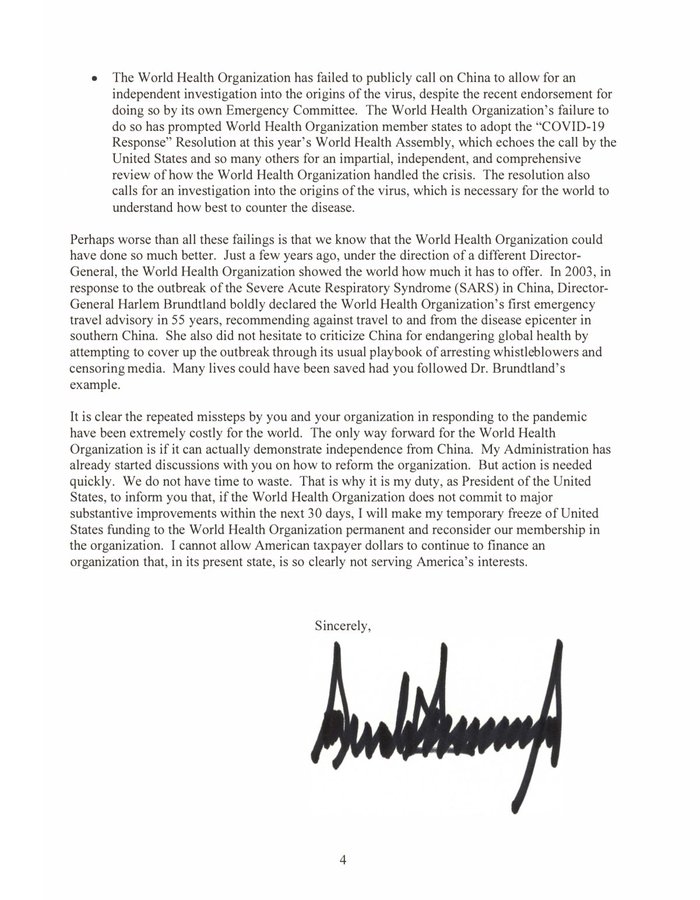 Got Any News Or Advert For Us? Send It via Email Info@abacityblog.com || Or WhatsApp https://wa.me/7038111972
Tags: CoronavirusCOVID-19President Donald TrumpTedros Adhanom GhebreyesusWHO
ShareTweetPin

VIDEO: How Police Demanded Money From Us To Go After The Rapists – Uwailas Sister Narates

Good For Her – Man Reacts Over Uwailas Death

JUST IN: Cause of Majek Fasheks Death Revealed