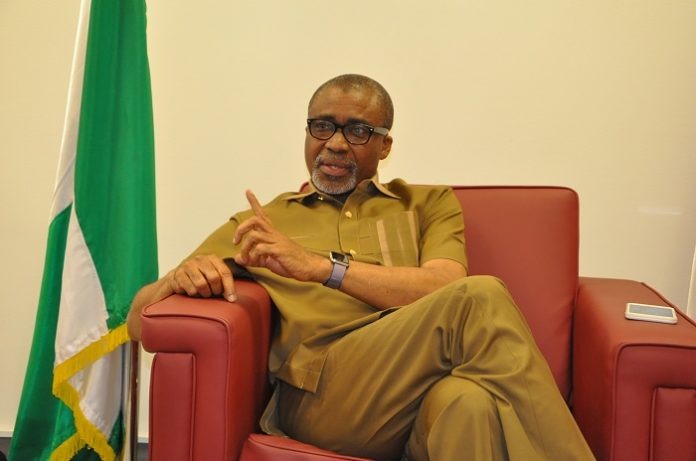 The leadership of Abia Mass Movement (AMA)  had called on Senator Enyinnaya Harcourt Abaribe to retract his steps and attract Projects to his immediate constituency as his sojourn of 17 years (since 2003) in the Senate had only attracted few Projects by him before 2007.

The group who noted that there’s no visible projects on his name in the six Local Government Areas of Abia South Senatorial District, made this statement during a courtesy visit to the President General Ohanaeze Ndigbo Youth Council Worldwide in his Umuahia residence, Abia State.

AMA, cried that Senator Abaribe had transformed himself as the Mugabe of Abia South Senatorial District, and beg Ohanaeze Youths to intervene and call him to order.

The however, said it had gone round the entire Abia South Senatorial District to evaluate the Constituency Projects attracted by him but unfortunately there’s no visible evidence that all the Constituency funds collected in the last 17 years had not been felt by the people in the six Local Governments in Abia South Senatorial District, compared to senatorial zones in Enugu and Ebonyi States.

This was contained in a press statement signed by the Co-ordinator of Abia Mass Movement, Mr Enyeribe Nwogwugwu, obtained by Abacityblog.

Parts of the statement urges Ohanaeze Ndigbo Youths to prevail on Senator Abaribe to return to the status quo or they will drag him to efcc.

“He (Abaribe) should name all projects attracted by him in Abia South Senatorial District between 2007-2020, failure to his stewardship to his Abia South Constituency within 72 hours, Abia Mass Movement will initiate move to recall him, but they will drag him to EFCC over the Constituency Funds he had been collecting since 2003,” the group said.

Meanwhile, in a swift response, OYC President General represented by the Deputy President General, Comrade Obinna Achionye, said that OYC will not support the move to recall Senator Enyinnaya Abaribe, but call on the youths to be law abiding and channel their grievances to the appropriate quarters, as they have the legitimate rights to hold any political office holder accountable,

and should not initiate any move to recall him, as Igbo Youths are not against any igbo political leader but warn Abaribe to stop funding faceless Youths from kalabari in Rivers to be impersonating the Ohanaeze Ndigbo Youth leadership,

and focus solely in his legislative duties for Abia South, and stop addressing himself as senator representing Southeast, we appreciate Abaribe’s vocal opposition voice as minority leader of the Senate, but Urge him to use his position to Federal attract projects  to Abia South.

In related developments, World igbo Youth Council had lauded the leadership of Ohanaeze Ndigbo Youth Council Worldwide led by Mazi Okechukwu Isiguzoro, for working in synergy with Igbo leaders especially Southeast Governors Forum, and their efforts to persuade the North, South West, Middle belt and Niger Delta to support the actualization of Nigerian President of igbo Stock in 2023

and Establishment of Southeast Regional Security Outfit OGBUNIGWE, which OYC initiated in January 11th 2020, the Secretary General Dr Ebitu Ude-ibiam made this call during their quarterly General Assembly meeting in Aba on Friday 20/3/20,

they condemned the Lagos pipeline explosion that occurred last weekend and insists that the illegal evacuations of igbo traders out of international trade fair complex market by Lagos Government is a wakeup call for igbo investors and entrepreneurs to return home to invest and help the actualization of Enyimba Economic City, which will change the fortunes of old Eastern Region,

Igbos should stop investing in the South West and North, and relocate their business headquarters to the old Eastern Region, especially in the actaulization of Enyimba Economic City.