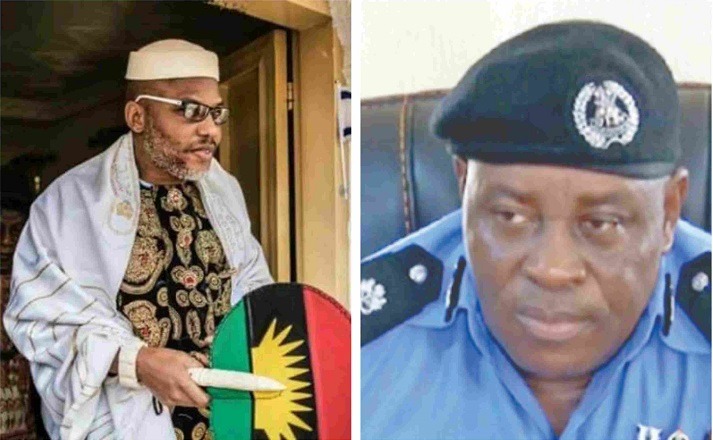 Mazi Nnamdi Kanu, leader of the Indigenous People of Biafra, IPOB, whose parents will be buried on Friday, 14th February, 2020, has apologised to the Abia State Commissioner of Police, Eneh Okon.

Kanu’s apology was following a directive he gave last night during a live broadcast on his Radio Biafra.

The IPOB leader was reacting following a press statement issued by the Abia Police boss, who warned that the Kanu’s parents burial may not hold if the members of IPOB attends the burial with the group’s full regalia or waving of Biafran flag.

Reacting to this, Kanu told his members to be ready and protect themselves, adding that if Police shoot any member of the group, the Officer’s children will pay for it. The threat was allegedly directed to the CP Eneh Okon.

But Kanu has apologised, noting that despite he is in the mourning period but he went too far. According to him, “Children should always be left out”.

Read the full statement below…

This Friday, mourners in Biafra will come together to attend the funeral for my beloved parents, Eze Israel Okwu Kanu and Ugoeze Sally Nmenme Kanu.

During this time of mourning, the Indigenous People of #Biafra are living in a constant state of fear.

The Abia State Commissioner of Police is threatening to disrupt the funeral and there continues to be a large military presence in the area, which has a history of inflicting violence against the #IPOB

In this time of immense grieving and anger, I made threats against the children of the Police Commissioner and other Nigerian officials on my radio program, Radio Biafra.

This was wrong and I sincerely apologize. Children should always be off limits.

It was my intention to bring global awareness to the threats and imminent danger the Government has placed on my family and community in hopes that shining a global spotlight on the actions of the Government will prevent them from inciting violence against my people.

In doing so, I went too far.

It is my great hope that the Indigenous People of Biafra can mourn in peace on Friday and can live in peace every single day forward.