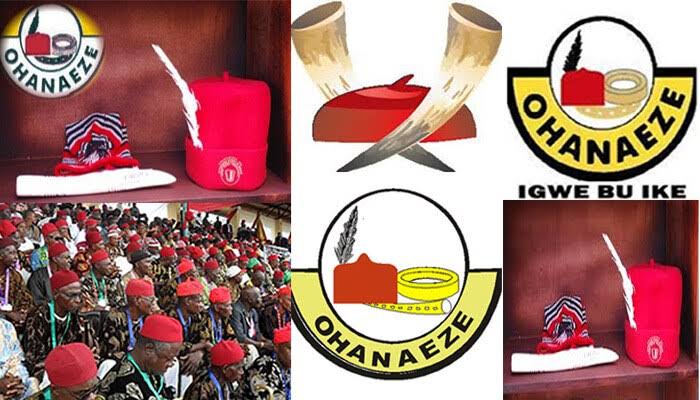 Ohanaeze Ndigbo Youth Council worldwide is a registered Organisation under the law, that’s independently running her affairs within the ambit of the Law, and Wonder how an illegal Organisation of PDP Igbo Caucus Meeting can expel a Legal Organisation.

According to Ohanaeze Ndigbo Constitution, An elected member can be removed from office if Such Member is guilty of any offence and appropriate disciplinary Committee is set up for fair hearing, and if found Guilty, recommendation will be set to a well Constituted Ime Obi Ohanaeze Ndigbo inside Ohanaeze Ndigbo Secretariat Enugu, with attendance of Current Igbo Serving Governors.

But here is a case of Witch-hunt and Political Vendetta against the leadership of Ohanaeze Ndigbo Youth Council worldwide by few PDP Igbo Caucus members that had been retired from active politics by the administration of President Muhammadu Buhari, now in a vendetta mission against those who supported APC victory in IMO State, because of our on unalloyed Support for President Muhammadu Buhari and our Declaration of Support for APC to take over the South East

Those who recently protested against the Supreme Court judgement of IMO State in Abuja was mobilized By external detractors of Ndigbo to take offensive action against a legal but registered Organisation, this is the huge Joke and the last push of those who had lost Control of The Igbo leadership of Ohanaeze Ndigbo, based on the recent Supreme Court’s verdict that sacked PDP in IMO State and Usher in APC.

PDP Igbo caucus will no longer impose a new Successor with Emeka Ihedioha ahead of 2021 Ohanaeze Ndigbo National election which prompted this malicious Hatred against those who will definitely take over the leadership of Ohanaeze Ndigbo from 2021, Igbos should quietly disregard Such purported expulsion as it’s the last kick of a dying Horse.

We will Continue to work with The secretary General Ohanaeze Ndigbo Dim Uche Okwukwu, who’s enjoying a robost relationship with Igbo Governors, and President Muhammadu Buhari, and We do not hesitate to say that We will Continue to protect the Collective political interests of Igbos and APC remains the hope for Igbos ahead of 2023, PDP is at the verge of collapse as More South East States will join APC before 2023

Igbos and Nigerians should disregard Such purported meeting of PDP Igbo Caucus nicknamed Ime Obi meeting done in a hurry without meeting Constitutional requirements, but done out of anger and frustration in a hotel.