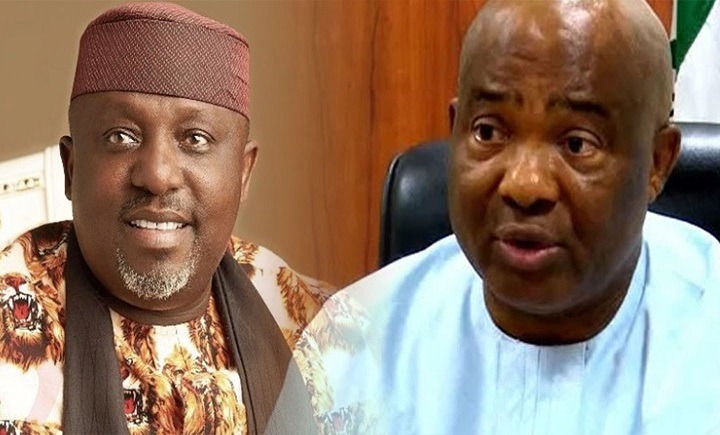 Stay Away From Hope Uzodinma, You have nothing Positive to Offer – Okorocha’s Kinsmen warns Him

Following the emergence of Hope Uzodinma as new Imo State Governor, the kinsmen of former Governor Rochas Okorocha, yesterday, asked him to keep away from Uzodinma to enable the new administration to succeed.

It should be recalled that Okorocha and Uzodimma are from the same senatorial district (Orlu Zone).

However, The kinsmen, under the aegis of Orlu Zurumee Youth Assembly, said Okorocha had nothing positive to offer the new administration.

According to the group, Okorocha’s eight-year administration left them poorer and more alienated than ever.

The group’s spokesman Odunze Chibuike said in a statement: “The ongoing effort by Chief Okorocha to impose himself on Governor Uzodinma and to a reasonable extent, present himself as a partaker in the victory of Governor Uzodinma with the entitlements that go with it, have been a source of worry to us.

“Ever since the Supreme Court pronounced Uzodinma as Governor of Imo State, Chief Okorocha has gone to town in jubilation for a victory he had vehemently resisted and ferociously fought against.

“He has rubbed it in that the victory in effect belongs to him, and by extension has saved him from the repercussions of his eight years of ruinous misrule.

“This has left an unsavoury taste in the mouth of Orlu people and Imo people at large, who have rejected Okorocha and despised his ways.

“It is shameful that there is absolutely nothing today in Orlu zone that shows that Okorocha governed Imo for eight years.

“Even the private university he built for himself has become a source of sorrow to the people of his hometown, Ogboko.”

The group argued that the worst road infrastructure anywhere in Nigeria is found in Orlu zone.

“We are, therefore, insisting that Okorocha must stay far away from this new administration because his influence will be subversive, negative and disastrous.

“With the appointments made so far, we are confident that Governor Uzodinma already has begun to choose competent hands who will deliver value and make Imo work again,” the statement added.