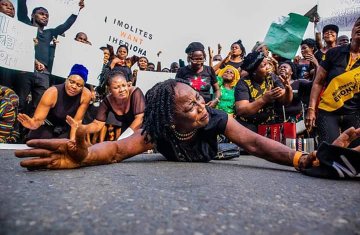 PHOTOS: Can Protesters really force the court to bring back Ihedioha as governor of Imo?

Yesterday, the anti Hope Uzodinma’s emergence protesters trooped out to the streets of Owerri, Imo state capital, to kick against the decision of the supreme court which led to the removal of Emeka Ihedioha as governor of Imo.

ABACITYBLOG reports that the apex court had on Tuesday ordered the Independent National Electoral Commission (INEC) to return Hope Uzodinma, candidate of the All Progressives Congress (APC), as winner of the election.

Uzodinma placed a distant fourth in the results announced by INEC. But the apex court declared him winner based on the APC candidate’s claim that his votes across 388 polling units were annulled.

The Peoples Democratic Party (PDP) has threatened to carry out a protest in Abuja on Monday.

Meanwhile, a political analyst has given a brief explanation of why Uzodinma was declared authentic Governor of Imo State by the Supreme Court.

Here is the link to read more;

Check out the photos of the protesters: