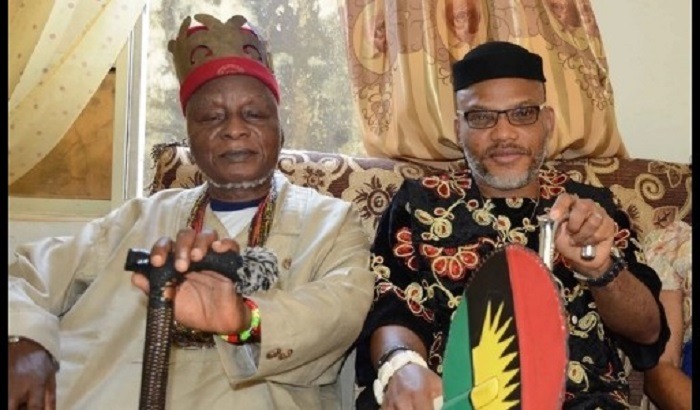 Following the viral reports that Mazi Nnamdi Kanu, the leader of Indigenous People of Biafra, IPOB, will be attending his parents’ burial in February, 2020, the group reports says otherwise.

Kanu, who was on bail while facing an alleged treasonable offence, disappeared from the country in a controversial circumstance shortly after his family house in Isiama Afara Ukwu in Abia State was allegedly attacked by the Nigerian Army in 2017.

Some of his followers were reportedly killed in the attack while his house was attacked.

Kanu’s father was the traditional ruler of Isiama Afara Ukwu community near Umuahia, the Abia State capital till his death.

According to a statement by the IPOB Media and Publicity Secretary, Emma Powerful, Kanu’s parents would be interred on February 14.

However, online news medium, had quoted Emma Powerful, as said that Kanu would attend the burial of his parents.

But in a statement, IPOB denied to have informed anybody of the return of Kanu for the burial.

The group’s Media and Publicity Secretary, Emma Powerful, in a statement said,

“However, arrangements are being put in place to ensure the ceremony is held in a secure and safe atmosphere.

“The movement and anticipated presence of our leader in his home during this period has yet to be finalised and as such, no confirmation or otherwise will be issued to that effect.

“IPOB High Command will determine under what circumstance any announcement will be made in the future.”