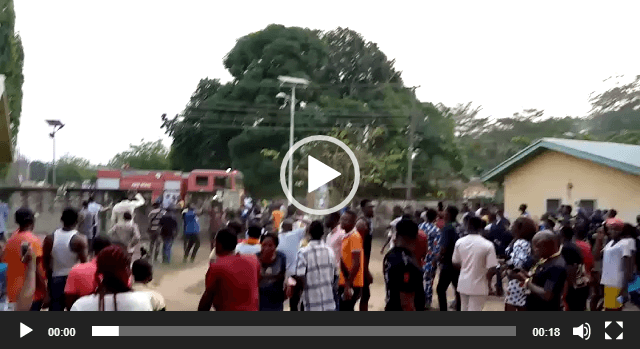 WATCH! What MOUAU Students Did To Fire Service Operators As They Arrived The Scene Of Fire Outbreak

As fire ravaged one of the hostel of Michael Okpara University of Agriculture, Umudike (MOUAU), students had taken swift reactions for late arrival of the fire service operatives.

Recall ABACITYNEWS reported that fire caught one of the boys hostel in the school.

It was learnt that the fire started with a spark from an electric wire which quickly spread over the student foams (beds) that were in the store.

Students tried in their capacity to stop the ravaging fire as the Students Union Executives led by the president, Hon. Comr. Otuonye Famous arrived immediately to seek solutions by calling in Fire Fighters to quench the ravaging fire that already left a part of the building filled with powerful flames and thick smoke.

Efforts were made to reach the fire service but it turned out the arrived the scene when the students must have quenched the fire outbreak.

This led to the students blocking the service-men from getting to the scene.