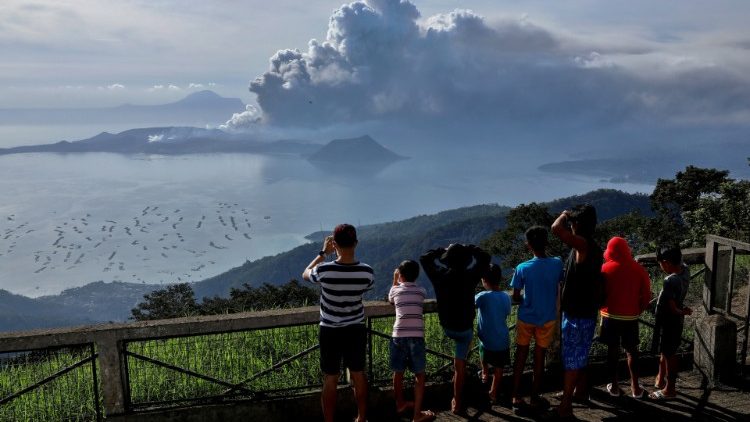 Taal Volcano in the Philippines showed streams of lava beginning to gush out of the vent on Monday, with a thick dark cloud of ash, smoke and steam in the sky. Thousands have been ordered to evacuate from around the island and its surrounding areas since the volcano became active on Sunday.

A Philippine Catholic Church official appealed for prayers and help on Monday for thousands of people displaced by a volcanic eruption.

Archbishop Gilbert Garcera of Lipa asked Catholics to join him in praying for the safety of everyone amidst the smoke and ash of the Taal Volcano on Sunday.

One of the most active volcanoes of the Philippines, Taal Volcano is in the middle of a lake about 70 km south of the centre of the capital, Manila. It spewed ash up to 15 km into the sky, prompting the evacuation of thousands of people, the cancellation of flights and warnings of a possible explosive eruption and volcanic tsunami in Taal lake.

As tremors shook the area, volcanic lightning flickered in the column of steam and ash.

Images from the scene on Monday showed streams of lava beginning to gush out of the volcanic vent, with the sky above still thick and dark with ash and steam.

The Philippine Institute of Volcanology and Seismology (PHIVOLCS) raised its alert level to 4 out of 5 – meaning “hazardous explosive eruption is possible within hours to days”.

Church shelter for evacuees
The parishes of Lipa Archdiocese have opened their doors to evacuees as the volcano continued to increase its activity.

RELATED POST:   PHOTOS: Man lost all his source of livelihood as fire razes his apartment

The seminary of the Society of the Divine Word (SVD) and other religious institutions are also accepting evacuees in Tagaytay City.

“Aside from prayers, we are appealing for donations in cash or in-kind for the archdiocese’s ongoing relief operations,” Archbishop Garcera said over Radio Veritas.

The archdiocese is currently assisting more than 3,000 evacuees who are in need of food and water. The archbishop said church workers and volunteers are working round the clock to ensure that the evacuees’ basic needs are met.

“We pray for the safety of people living in areas close to the Taal volcano”, said Bishop Pablo Virgilio David of Kalookan and vice president of the Catholic Bishops’ Conference of the Philippines. Cardinal Luis Antonio Tagle of Manila and other bishops also offered prayers amid the volcano eruption.

Orders of evacuation
More than 16,000 people were evacuated from the volcanic island and the area immediately around it – normally a popular tourist spot.

At least 15,000 people have fled their homes in Batangas province, according to an initial report from the local disaster risk reduction and management office.

Schools and businesses shut across the Philippine capital on Monday as the volcano clouds blew across the city. Flight operations at Manila’s international airport partially resumed, authorities said, after at least 240 flights were delayed or cancelled on Sunday.

The Philippines lies along the “Ring of Fire,” a basin of the Pacific Ocean where many earthquakes and volcanic eruptions occur.

One of the Philippines most active volcanoes, Taal has erupted more than 30 times in the past five centuries, most recently in 1977.

Compilation Of Videos Of Volcanic Eruption Across Manila and Philippines