Residents of Aba, commercial city of Abia State have expressed worry about a new form of policing in their community.

The people are worried by the desperation of some policemen to extort them, using rough looking civilians, who are now kitted in police uniforms. But the state police command has denounced such actions, even though the impostors have continued to milk the people.

The recent activities of Nigeria Police Force in Aba Area Command, Abia State, show that they have shifted away from an organization established as the principal law enforcement agency in the entire Nigeria, to what some residents now call them; “Money Making Machines”.

As traders and various business minded residents of Aba go about their businesses to make money in legitimate ways, dubious police officers employed by government and paid with tax payers money connive with some hoodlums on their payroll to extort them with prodigality and recklessness.

A Deliberate And Calculated Blackmail Against A Diligent Police Officer

VIDEO: Nigerian Police Officer shot a man for speaking up against an assault on his neighbor

This mercantile policing method is now the in thing among some unscrupulous elements within the Aba Area Command who are involved in it, while on the other hand, it is building vexation among law abiding residents, who cannot longer differentiate between police officers and criminals.

Currently, in most Police Divisions Aba, some senior police officers, who were employed by the Federal Government to protect lives and property of citizens, are now employing and recruiting some unscrupulous hoodlums and empowering them to cause financial havoc to residents.

These new employees of police are popularly known in local parlance within the city as “Catchers”. These Catchers are now becoming the middlemen between real police officers and some sections of the society they relate with and in most cases, they replace police and do the ‘policing’ themselves. 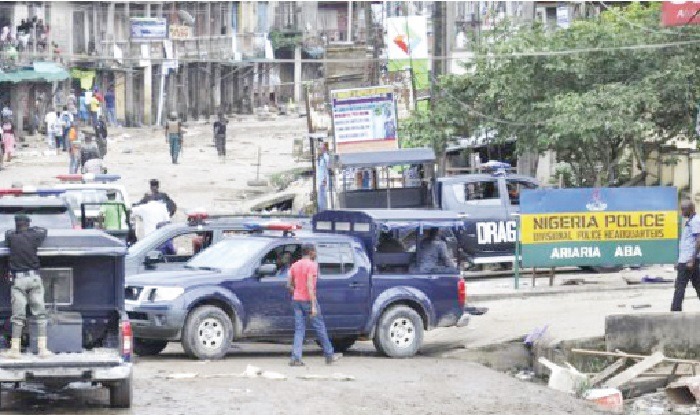 NewTelegraph reports that in most Police Divisions in Aba, especially the Aba Area Command Headquarters and the Ndiegoro Police Division (Cameroon Barrack), catchers are gradually displacing the real officers during patrol and raiding of any ‘suspected’ areas.

These catchers arrest people, settle monetary dispute, free arrested people after collecting money from them and most times without even getting to the police station.

They now use the name of police and some police outfits given to them by police officers within Aba Command, to terrorize residents and make them believe they are genuine police officers.

Reacting to the situation, the Civil Liberties Organization(CLO), told Journalists that the extortionist activities of some unreliable Senior officers in Aba Area Command, have now led to the institutionalisation of extortion by establishing a system in which even the rank-and-file officers now employ hoodlums, empower them and compel them to go out into the streets, extort in the name of police and make returns.

The CLO through its Chairman in Aba Zone, Prof. Charles Chinekezi, called on the Inspector General of Police to intervene in what is happening in Aba before some dubious police officers will convert an important security agency like police to a capitalist institution, where hoodlums (catchers) are now given daily or weekly financial targets by the police.

“With the activities of these people called catchers, it’s obvious that some criminals have infiltrated the police force and trying to make the police think they are working as informants for them or whatever.

“The most dangerous part of the whole thing is that they now have access to police uniforms, which they now wear and get emboldened to extort people.

“These people are now monsters to the hard working Aba people. You know when a non commissioned person is pursuing his own interest, you know the consequences.

“These people called catchers are hoodlums and vagabonds and the least people anyone will expect to see working with police, but it’s unfortunate that police could allow themselves to be ridiculed like this.

“We know them. Aba people see them and these persons are using Federal Government Security Agency like police to work for their own criminal interest and police is sitting and watching. How on earth do they intend to clean this kind of mess?”

Mr. Samuel Onuigbo, a restaurant/bar owner, told our reporter that the activities of catchers are now serious source of worry to him and people involved in his kind of business.

According to Onuigbo: “These people are frustrating us out of business. Do you know that within this our area, it is like what they do now is when they lack money and they see anyone entering a bar with a nice car, they’ll come in, wait, monitor and then, put call across, arrest the person with some charges and then go out to extort him either inside police station or within his car.

“Not only bars and restaurants; police and catchers now move to some of these small hotels in the morning, afternoon and evening, demanding returns and anything they didn’t get it, they’ll come back to raid the place and accuse them of one thing or the other.

“The funny thing is that they carry out these activities with mainly catchers because they know it’s not an approved move but they’ll likely label some criminal charges against anyone who fails to cooperate with them and most times, use catchers to put certain evidences only them knew the source.

“These catchers are now established as part of the police in Aba. Whenever they want to carry out all those illegal raids that were not approved by the higher authorities, they can rent a full 14 sitter bus, with just two police officers and six catchers. They started doing this kind of thing mostly in the night, but they now do it in the day.”

Herbert Otuonu said that the worst mistakes police officers are making is to be cooperating with criminals they call catchers. He stressed that the same catchers will one day give out important security information about police to their fellow criminals because they now know the police in and out.

According to him: “The worst mistakes these police officers are making is to be cooperating with criminals they call catchers. These same catchers will still leak important information about police to criminals and little wonder you see how porous Aba is security wise.

“Since many people in the city started resisting those catchers who appear on mufti, what police now do is that they give them police customized T-shirts, Mobile Police Long Sleeve Shirts and even their Black Combat and Belt to make them look genuine.

“Here in Aba, catchers snatch people’s motorcycles and continue to use it for their daily raids without returning it to the owners. This thing is happening all over Aba and everyone is now afraid. Currently in Aba, what police and these catchers do is that they use them to set people up and extort money from people.

“These catchers will go from place to place pointing fingers at innocent residents they believe could afford certain amount of money for bail and police will raid the place with one allegation or the other.

“You can visit any police station in Aba and see the kind of cases they have there. The real issue now is that they don’t even arrest and charge the so called offender to court, but they arrest and demand huge amounts ranging from N150,000 to N200,000 from where they take theirs and settle catchers.

“The activities of police and their catchers are becoming embarrassing to even me as a civilian, but I don’t think the police officers involved in this are as ashamed as I am. I have friends among police and I must say that most of them are not happy because these catchers are destroying the little remaining image police is managing to keep alive.”

Another resident who gave his name simply as Tochukwu, said his experience in the hands of catchers at Ndiegoro Police Division made him believe that some senior police officers who lead patrol teams in Aba prefer working with catchers to working with fellow officers because catchers get better returns with their brutal intimidating method of ‘policing’.

“If you get to the gate of Aba Central Police Station, or that terrible Cameroun Barracks, you cannot differentiate between a real police officer and a Catcher.

“The only difference between what is happening in a construction site and many police stations in Aba is that the workers and bricklayers earn their pay and don’t extort anyone to get their daily and weekly pay.

“If you get to Cameroon Barrack, and even the Area Command, Catchers are now paid on daily and weekly basis according to their ability to catch people, extort people and make returns to those who sent them.

“They pick women and men, charge them with one allegation or the other. Some will bail themselves with N20,000, N30,000 and N10,000 then according to the agreement with the police officer in charge of the team, they’ll either be paid on daily basis or on weekly basis.

“On the day of the monthly environmental sanitation, they’ll load their buses full of catchers arresting anyone they see. Even if you’re in front of your house, they don’t care if you want to clean up your environment or not, hence they get the opportunity to pick you, the next place you’ll land is Cameroun Barrack.

“It’s just that I don’t have voice in the society but for those who can help, let them tell the governor or whoever it may concern to come and see what Police is doing to Aba people at Cameroun Barrack.”

“Their new method of extorting people now is to point fingers at innocent youths and tag them members of the Indigenous People of Biafra (IPOB), and hence they do that, it will now become a big issue and they don’t mind cooking up cases to prove it if you fail to pay them amount ranging from N100,000 to N200,000.”

When contacted about the activities of catchers in Aba, the state Commissioner of Police, Ene Okon, described them as impersonators and vowed to do something drastic about them.

He said that the police under leadership have warned all the DPOs that on no account should they go on patrol or arrest with any civilian except a registered and recognized vigilante group.

In his words: “The police authority headed by me does not know about getting those people to work. They are perfectly impersonators and we are going to do something drastic about that.

“I’ve received such Information and I’ve called all the DPOs and I warned them that on no account should anybody work with any civilian who calls himself informant openly.

“I’ve warned my men both verbally and in writing that on no account should they allow any civilian to follow them on patrol, arrest or anything. The only people allowed to work with the police are registered and recognized vigilante groups.

“Those are the people allowed to work with the police because they have to be scrutinized, screened by both traditional rulers and elders of their community who will present them to the DPO who will further screen them.”

“And in whatever they do, they do in collaboration with police who will guide them. Those are the recognized. Any other person outside a registered and recognized vigilante is not known by the police.”

Got Any News Or Advert For Us? Send It via Email Info@abacityblog.com || Or WhatsApp https://wa.me/7038111972
Tags: Aba Abia StateNigerian PolicePolice Command In Aba
ShareTweetPin

COVID-19: Man On The Run After Testing Positive For Coronavirus In Aba

Nnamdi Kanu speaks on becoming the first President of Biafra

How The Media Contribute To The Abuse Of Judicial Process