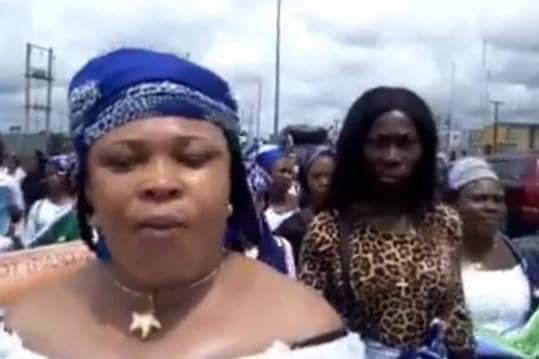 The leader of Women for Change Initiative and Equity Organization Lady Jane Ogbauta, has alleged that she was attacked by a gang of five men in her business premises on 149 Ikot Ekpene road Aba the commercial hub of Abia state.

Ogbauta, had on Tuesday October 8, 2019 led a protest against alleged deplorable road network in Aba with members of her organization.

The women had during the protest gave Governor Okezie Ikpeazu, a 100 days ultimatum to fix the roads or they will stage a 10,000 women protest and lockdown the Abia government house.

But in statement made available to Citytimes on Friday the Leader of protest stated Solomon and accomplices had on Thursday October 10, 2019 barge into her shop and assaulted together with two members of her group.

She alleged that her attackers who wielded a gun also damaged some of her goods and made away with an undisclosed amount of money.

The statement read in part, ” I was in the company with Mrs Ifeyinwa Ananaba the leader of our group in Ugwunagbo LGA, and Mrs Uloma Uzoma when the men attacked us.

“Assaulted us and left Mrs Uloma with several injuries on her chest, while we were severally thrown on the floor. They also video recorded the incident.

” The leader of gang bragged that he was
Chijioke Solomon (aka Dollar) an indigene of Ezi Nwangwa in the Ogbor hill area of Aba and nobody can harm him not even the inspector General of police”.

Ogbauta, added that the leader of gang had question them if they knew the implications of the protest they held against the state government.

She said reports of the incident had been forward to the office of the Aba Area Commander of the Nigerian Police force and the Commissioner of Police in the state Mr Ene Okon.

She urged the Police to investigate those behind the attack and bring them to book.

She pointed out that her group was not working nor receiving sponsorship from any political party, but they were only concerned about good governance in the state.

“Our group is poised to demanding for good governance, equity and inclusiveness from all level of government.

“We still stand on the declaration of our protest and demand that the state government should fix the roads in Aba or face a 10,000 women protest which will lockdown the Abia government house after 100 days.

“Even through we have been receiving diverse threats through calls and text messages but we will not relent”, she said.