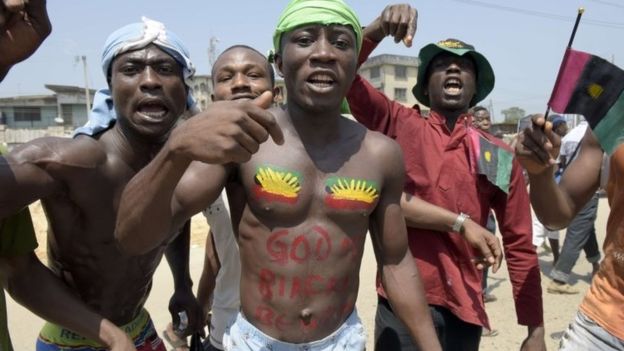 Biafra Nations Youth League (BNYL), has declared that the struggle for Biafra will continue even if the South East produced Nigeria’s next President come 2023.

The group said South-East have sacrificed alot in the struggle so far and won’t be able to give it out for mere presidency.

This declaration was made by the group’s Secretary-General, Ordu Jeoffrey Nwosoiba in a statement made available for newsmen.

He said, “Biafra will continue even if Nigeria decides to allow President of Igbo extraction. The demands for a separate state of Biafra remains sacrosanct.

“The people of the region have sacrificed a lot for Biafra that it is no longer possible to drop the agenda for Igbo Presidency,

Nwosoiba also declared that the group enjoys a large followership especially in the South-south geopolitical zone, adding that all those who were arrested at Bayelsa junction on their way to the inauguration of Biafra National Council, BNC, officiated by Chief Dokubo Asari on 17 august 2019 were all indigenes of Rivers State, Cross River and Akwa Ibom.

He lamented that it will be “too difficult for them to adopt Igbo Presidency instead of Biafra which is our right.”

Nwosoiba admitted that his people are Igbo speaking but are yet to be fully integrated into Igbo union due to the identity crisis in Rivers State caused by the civil war.