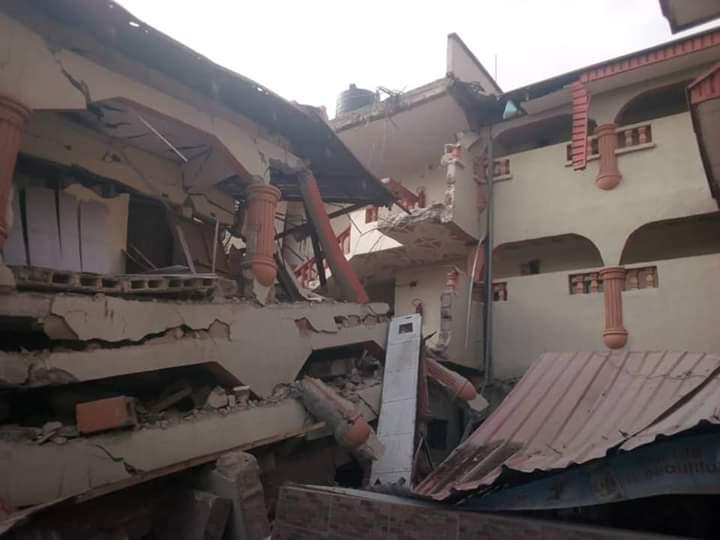 Popular Hotel Collapse In Ebonyi State with over 40 people inside

The hotel which is one of the popular hotels in the state, located close to Ebonyi State University, Presco Campus, Abakaliki, collapsed at 6:30 pm Wednesday evening.

Reacting on the development, the Special Assistant (SA) to Governor David Umahi on Capital Territory, Chief Ejem Okoro, said the hotel had been sealed off following the sad occurrence.

According to him, the closure became necessary to avoid loss of life, to enable thorough investigation to ascertain the possible cause and to forestall further collapses.

The SA speaking with reporters said he was sure that about 60 persons were in the hotel when it collapsed, adding that the hotel will remain sealed pending all investigation by the government are completed.

However, a management staff of the hotel management, Chief Austin Orji, who spoke to journalists at the scene of the incident said, the affected wing only had about 42 occupants but who were not in their rooms when the building collapsed.

“We observed that there had been cracks on some of the pillars holding the building and immediately cordoned off the side of the building had commenced renovations before the building collapsed,” Orji said.

He then thanked God that no life was lost, adding that all those who lodged in the hotel were outside the building for a seminar when the incident happened.

However, the hotel was said to have been commissioned by the Minister of Culture, Ambassador Franklin Ogbuewu in 2005.

RELATED POST:   2020: Outlook for infrastructural development in Abia is very bright - Ikpeazu
Got A News, Press Release or Sponsored Publication? Send It To Us Via Email: Info@abacityblog.com
Loading...