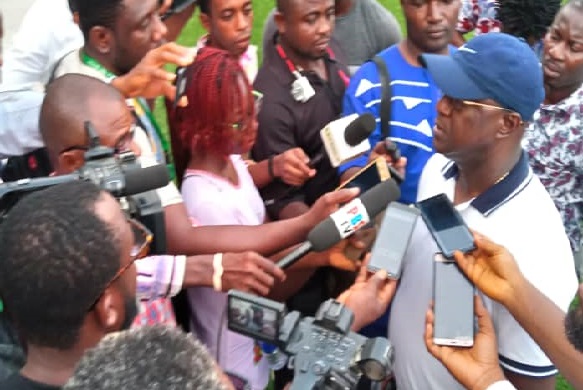 Lagos-based MFM FC head coach, Fidelis Ilechukwu on Saturday said that his team would not target anything short of victory against Enyimba International of Aba on Sunday.

He said that anything short of that would amount to failure ahead of this weekend’s game in the Match Day 13 of the Nigeria Professional Football League (NPFL).

The News Agency of Nigeria (NAN) reports that the Group A leaders will host seven-time NPFL champions of the top-flight at the Soccer Temple, Agege Stadium.

According to Ilechukwu, the team will be looking forward to recording their first-ever win against the Peoples Elephant.

“Enyimba’s game is very important to us you know, we have yet to beat them before in our home and away games.

“It’s a game we must win to remain at the top. We know their antics, we know their strength and we know everything about Enyimba FC. I can tell you their possible line-up.

“Our former players, Austine Oladapo, Abdulrahman Bashir, Thomas Zenke, Onuwa Chukwuka and Stanley Okorom may likely start for them, but we have prepared. So, anything less than three points is failure.

“We have prepared for the game and we are waiting for them, he said in a statement by the club’s Media Officer, Olawale Quadri.

In spite the visitors impressive unbeaten streak in recent matches this season; Ilechukwu believes his charges will at the end of the match put the Aba-based team to the sword.

“I am aware that Enyimba is a technical side and also of their unbeaten run. We are number one on the log on merit and we are no push over, so come Sunday Enyimba must fall,’’ he said. (NAN)

RELATED POST:   Ikpeazu to Install international standard electronic scoreboard at Enyimba Stadium Aba
Got A News, Press Release or Sponsored Publication? Send It To Us Via Email: Info@abacityblog.com
Loading...