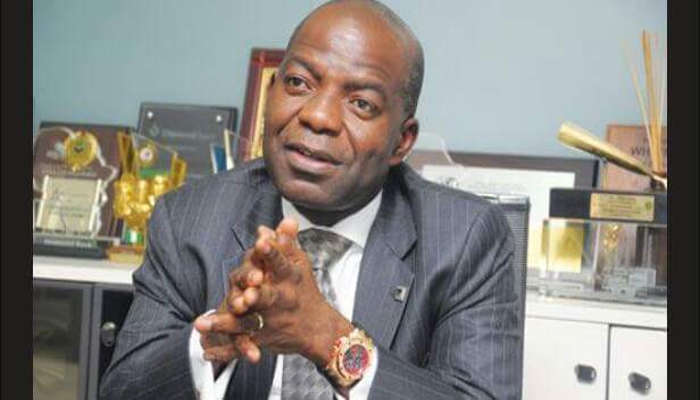 Musiliu Obanikoro last week in the course of answering questions from defence counsels in the EFCC case against Peter Ayodele Fayose as a prosecution witness was quoted by Premium Times to have said that he gave verbal instructions to Mr Alex Otti to release the sum of N1.2bn to Fayose.

Alex Otti and his team have come out to do what, in their opinion, is a rebuttal, claiming among other things, that there was no way a banking transaction of that huge sum could have been consummated verbally, while posting a document that shows a certain transaction of the same N1.2bn from the controversial account, Sylva Macnamara.

1). The allegation was made by Musiliu Obanikoro himself as a prosecution witness the same as Alex Otti as quoted by PREMIUM TIMES and could not have been flippant about it considering the seriousness the EFCC attaches to the case because of the persons involved

2). It is not true that such a huge transaction cannot be consummated verbally as history of Nigeria’s banking sector has shown that several bank Managing Directors (including Alex Otti in this case) have been known to be so reckless with depositors’ funds. It was for such executive recklessness as this that previous bank MDs have been convicted of criminal breaches of banking procedures during the Sanusi Lamido Sanusi era

3). It is also not correct as stated in the defence of Alex Otti and his team that Otti as MD had nothing to do with the transaction since he was neither the account officer nor the branch manager of the bank’s Apapa branch where the posted “withdrawal instruction” was addressed. Those familiar with banking processes will agree that no bank manager anywhere in Nigeria has an authorization limit of up to N1bn. Withdrawal of such humongous amounts must receive the blessings of the bank’s MD before it can be consummated. Withdrawal limits in the banking industry go from:

b. Head of Operations

d. Regional Manager, up to the

e. MD/CEO (all depending on the amount involved)

5). While Obanikoro in his testimony to the court confirmed that the Directors of Silva Macnamara are Ezekwe Ikenna, Oshodi Idowu and Adebiyi Elizabeth, the signature on the transaction document posted by Otti and his team reads “Olalekan”. While I concede that signatories to a particular corporate account might be different from its Directors, I challenge Otti and his team to also publish the mandate of the account for the world to see as they have done with the purported transaction instruction unless they want to tell us that the transaction was perfected without due authorisation.

6). Since Musiliu Obanikoro, based on facts before the EFCC and the courts, has confirmed that the transaction in question has no written instruction, it is therefore correct to state that the document being peddled by Alex Otti and his team as the “withdrawal instruction” is not the one for which Fayose is being prosecuted as his name is not even on that instruction, and the implications of that is known to everyone.

7). Things will certainly get clearer when Mr Alex Otti mounts the witness box for cross examination by counsels in the matter. For now, that transaction remains yet another sour point in Alex Otti’s famed chequered and inglorious banking career for which Diamond Bank struggled to survive but has eventually succumbed to a take over by Access Bank which is soon to be finalised.

8). While it is true that Igwe Alfred Achebe, the Obi of Onitsha, paid glowing tributes to Alex Otti on the back of what, as at then, was thought to be a good job done at Diamond Bank, events that follow Otti’s exit of the bank have since confirmed that he made a mess of the bank for which it is being taken over by another bank.

9). Recall that Diamond Bank was fined the sum of N250m for fraudulent transfers abroad executed by it for the period also covering the time Alex Otti was the bank’s MD. It is a fact that such fraudulent transfers attract huge kickbacks to the MD just the same way transactions consummated in breach of banking procedures like that involving Obanikoro attract huge personal gains to the MD at the expense of the institution.

10). The bank also had to retrench over 1000 staff in 2015 to survive the banking shenanigans of Alex Otti but still couldn’t

11). It is on record that Diamond Bank staff engaged through Otti’s wife’s company had to protest against Alex Otti and his wife at a time for fraudulent deductions to their salaries (https://newafricanpress.com/2013/02/27/slave-labour-diamond-bank-contract-staff-protest/

RELATED POST:   ABSIEC CHAIRMAN: You can't Fix A Match, Play In It and Still be The Referee - Abia APC tells PDP