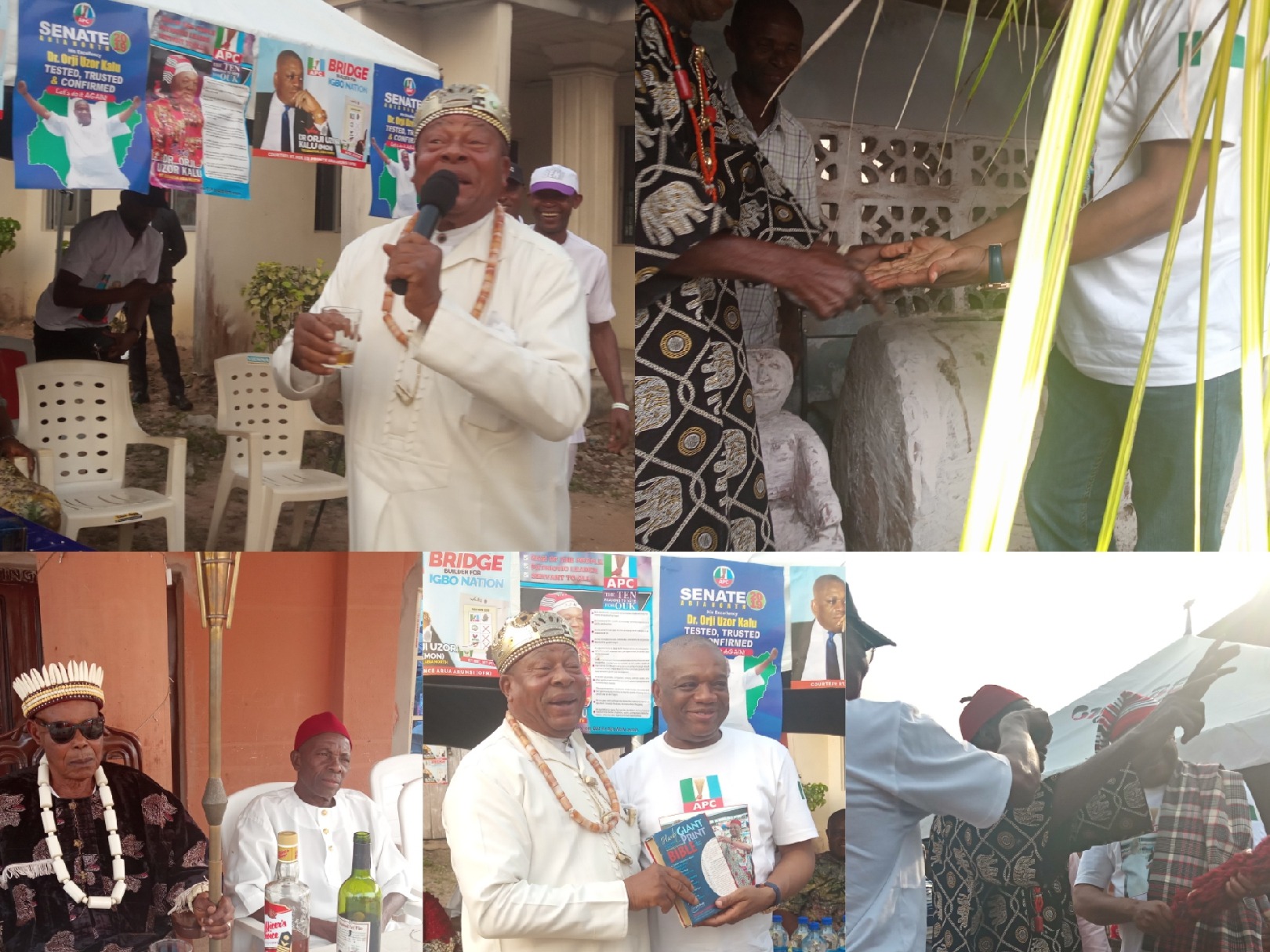 Abia- Traditional ruler of Amaofufe Autonomous community of Igbere Abia State, His Royal Highness,Eze uwakwe Omiiko Ukaegbu on Saturday, insisted that the All Progressives Congress (APC) candidate for the Abia North Senatorial election , Dr Orji Uzor Kalu would win his Senatorial polls and the presidential polls for President Muhammadu Buhari as death would strike anyone working against Kalu’s ambition.

The traditional ruler who made the assertion on the campaign trail of Dr Kalu in Igbere, maintained that the outcome of the general polls would deal a deadly blow to Kalu’s oppositions and detractors who he said “would find the shortest route to escape because the land of Igbere would fight them to death.”

The outspoken monarch explained that Kalu’s “sterling performance “as governor gives him automatic right to vie for any position in Nigeria . He told his community people who came out enmasse to declare support for Kalu that enemies’ hard work to cause confusion in Igbere is a waste of time because Igbere people are full of love for Kalu .

He said the sheer number of kalu’s fans trooping out for his ward to ward meetings in Abia North was a clear indication that the people held the former governor in highest regards.

The Monarch lauded Kalu for what he noted were his giant strides in education, economic and agricultural revolution, as well as the attraction of projects in each council area of Abia state when he was governor.

“ We own Igbere, we own Abia North, we own Abia State , Dr Orji Uzor Kalu will win his election and his friend president Buhari will also win in Jesus name . We thank you for this-opportunity to interface with you and rub on how to move Abia forward. The large number of genuine people attending your ward to ward meetings, represents how much you mean to the people of Abia and we are very proud of you .

“Your educational , economic, agricultural drive and revolution in the state is legendary as you ensured free education, free medical and timely payments of salaries and pensions.

Similarly in his remarks, traditional ruler of Umuisi Autonomous community , His Royal Highness Eze Eme praised the former Governor for the development and leadership Abia experienced during his tenure.

Eze Eme lamented that after Kalu, Abia was neglected, ignored and the people had been suffering, adding that “today umuisi people is happy to move with the person we know and our own in order for our people to be liberated”

He noted that Kalu by conducts and actions has proven that he was “a real leader with the heart of a gold, a humane heart that feels for all”

The Monarch therefore thanked the former governor for building all the roads in Umuisi and Igbere, just as he assured him of the total support of Umuisi people to ensure that he is elected to continue with the good job he is doing even as a non-senato

“Today Igbere has a name because of Orji Uzor and we are looking forward to more glory.

“The entire Igbere people are behind you and will massively vote for you to ensure you represent Abia North in the National Assembly.” He commented