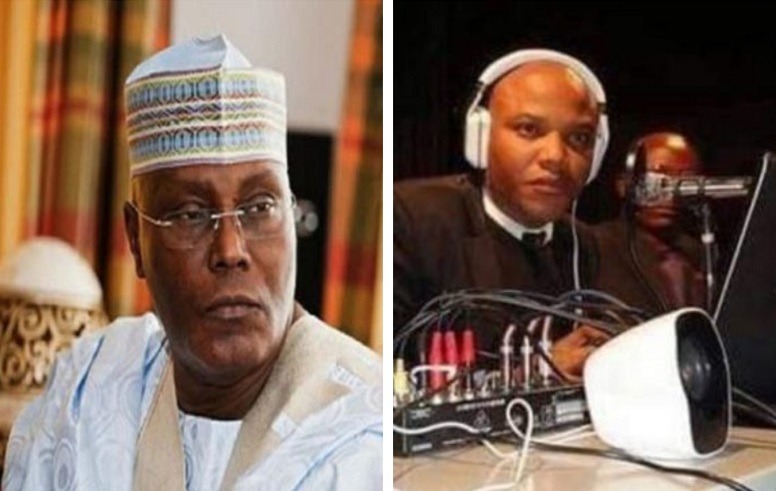 VIDEO: Lamido of Adamawa confirms Nnamdi Kanu’s claims that Atiku is from Cameroon

An old video of late Emir Aliyu Mustapha, Lamido of Adamawa, has surfaced online. In the viral video, Emir Aliyu, noted that the people of Adamawa transcend from Cameroon.

This is following a claim by the leader of the Indigenous People of Biafra, IPOB, Mazi Nnamdi Kanu, who alleged Alhaji Atiku Abubakar, the Presidential candidate of the Peoples Democratic Party, PDP, in the coming election is from Cameroon.

Kanu, had in his recent Radio Biafra broadcast from London, UK, claimed that Atiku who grew up in (Kojoli, Jada L.G.A of Adamawa State), is hails from Cameroon and therefore, not fit to seek for any political post in Nigeria. According to him, “Atiku is a Cameroonian, whose area of Adamawa was in Cameroon”, Kanu alleged.

Corroborating the story with an old footage of the late Lamido of Adamawa, Emir Aliyu Mustapha, who died in the evening hours of Saturday, 13th March 2010. A Nigerian twitter user, John Fanimokun @TallJohn who shared the “One minute and three seconds” video (1:03), captioned it; “Emir Lamido of Adamawa had also confirmed Kanu’s uncovered story on Atiku’s Nationality in the past”.

Playing the video, Emir Aliyu, while addressing a conference, made it clear that his kingdom (Adamawa, transcend from the Republic of Cameroon).

Emir Lamido of Adamawa had also confirmed Kanu's uncovered story on Atiku's Nationality in the past.

Below is full speech of the late Emir;

“Many of (you) those who are shouting their heads off, we have no where to go.

“But, Mr. Chairman, I and the people of Adamawa and many others have somewhere to go, I’m the Lamido of Adamwa and my Kingdom transcend Nigeria and Cameroon.

“The larger part of my kingdom is in Republic of Cameroon and part of that kingdom… (cut in by the moderator of the conference).

Meanwhile, according to Wikipedia, Atiku Abubakar GCON is a Nigerian politician and businessman. He served as the 11th vice-president of Nigeria from 1999 to 2007 under the presidency of Olusegun Obasanjo. He is a member of People’s Democratic Party. In 1998 he was elected Governor of Adamawa State.

RELATED POST:   There is a huge Black Hole at the Heart of Presidency - Nnamdi Kanu claims

In 1998 he was elected Governor of Adamawa State. While still Governor-Elect, he was selected by then presidential candidate Olusegun Obasanjo as his running mate. The duo went on to win elections in February 1999, and Abubakar was sworn-in as Nigeria’s second democratically elected vice president on 29 May 1999.