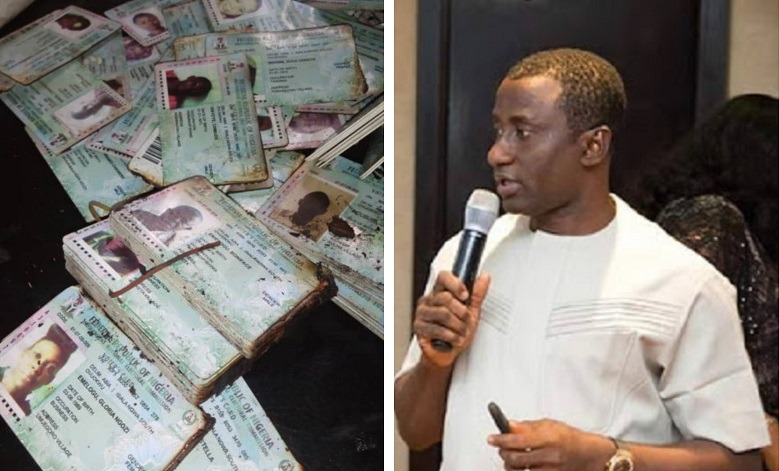 Dr. Uchechukwu Sampson Ogah, the governorship candidate for All Progressive Congress, APC, in Abia, has reacted on the burning of the office of the Independent National Electoral Commission (INEC) in Umu-Ikaa, Isiala-Ngwa South Local Government Area of Abia State.

According to ABACITYBLOG initial reports, the fire started in the midnight on Saturday leading to Sunday. Over 10,000 of uncollected PVCs belonging to eligible voters in the state was destroyed.

Reacting in a statement from the Uche Ogah campaign office, the oil magnet described the acts as rascally, antidemocratic, antisocial and an attack on a major institution of democracy in Nigeria.

The full statement reads below;

“On hearing this news, it sounded like a Nollywood drama. Not until it was confirmed by various sources and believable media authorities.

“Dr. Uchechukwu Sampson Ogah and his Campaign Council condemn this act of brigandage in its entirety. It is rascally, antidemocratic, antisocial and it is an attack on a major institution of democracy in Nigeria.

“These uncollected PVCs belong to eligible voters in our dear state. And Dr. Uchechukwu Sampson Ogah and his Campaign Council are particularly concerned because we view the burning of these PVCs as a deliberate act to sabotage one of our strongest political base.

“With the overwhelming momentous ground our party, the All Progressives Congress (APC) has gained in Isiala Ngwa South and other local government areas in the last one year, we are mindful to say that the failed PDP government in Abia State in their attempt to stop our victory in the coming elections may be behind this satanic act.

“We hold this view strongly because they are historically known for violence, intimidation and diabolism. In 2015, the good people of Abia State saw the marauding party condescend to so many things most absurd than the burning of INEC office. They became pall bearers (Nde Igbe Ozu), in their attempt to instil fear in order to remain in power.

“The PDP in Abia State is jittery because the good people of Abia State have rejected them and have made up their minds to VOTE-IN the APC, our governorship candidate, Dr. Uchechukwu Sampson Ogah and his running mate, Rt Hon Martins Azubuike. With the DEFEAT staring them in the face, they are fast descending into the abyss, desperate to do anything to hold on to power despite their failure in governance and the cluelessness of their regime.

“The recent kidnap of our party chairman in Abia State and the exposed plot by the son of a former Governor of the state and his co desperate characters to assassinate Dr. Uchechukwu Sampson Ogah, may not be unconnected with this attack on the INEC office.

“We call on security agencies to spring into action immediately to stop these marauders. We call on the Commander in Chief of The Armed Forces of The Federal Republic of Nigeria, President Mohammadu Buhari, to mandate the appropriate authorities to quash these ugly incidences happening in Abia State immediately, before it becomes too late. This particular unholy incident and others like it must be thoroughly investigated and those involved arrested.

“Dr. Uchechukwu Sampson Ogah and the All Progressives Congress in Abia State will no longer treat these dangerous emerging trends with kid gloves. We are now empirically sure that the failed PDP government in Abia State and their band of villains will stop at nothing in their attempt to hold on to power. But we are determined to stop them and their evil plan in order to restore joy to our people.

In a swift reaction, the Peoples Democratic Party, PDP, in Abia State has reacted to the burning of the office of the Independent National Electoral Commission (INEC) in Umu-Ikaa, Isiala-Ngwa South Local Government Area of the state.

Mr. Onyebuchi Ememanka, an aide to Governor Okezie Ikpeazu, said the party has no hands in the acts. “let me state categorically that the PDP had no hand in this unfortunate incident”, Ememanka wrote on his Facebook wall, while reacting to opposition statements.

He wondered the motive, especially when elections are still some weeks away and INEC is yet to distribute election materials.

According to him; “Whoever went to burn the INEC Office before election and set fire on uncollected PVCs has one motive and one motive only, namely, to frustrate the process of election and stop as many voters as possible from voting”.

He further noted that Isiala Ngwa South, like all other Ngwa local governments are natural strongholds of the PDP and therefore, the party can’t think of such acts”.