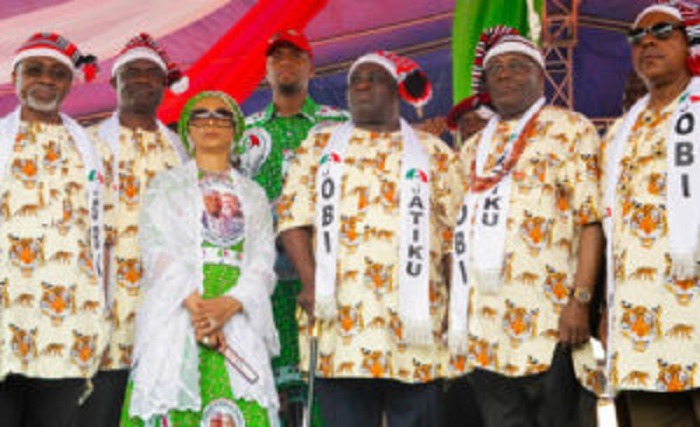 What Atiku said in PDP Presidential Rally In Abia

Alhaji Atiku Abubakar, the presidential candidate of the Peoples Democratic Party, PDP, was in Abia State today, for his presidential campaign rally.

Atiku who came along with his running mate Mr. Peter Obi and other PDP heavyweights, including the party National Chairman, Uche Secondus, was received by the state governor, Okezie Ikpeazu, in Umuahia, the Abia State capital.

The presidential rally was held in Umuahia Township Stadium. Speaking at the event, Mr. Obi said within two Years, the Administration of Atiku Abubakar will turn Abia Around.

“Within Two Years, Abia and Portharcourt will be One Town”
“Abia this is your Government, nobody should tell you stories again”
“Atiku will stop Hunger” He Said.

The Presidential Candidate of the PDP Atiku Abubakar promised to create Million Jobs.

”I want to thank you for being Loyal to PDP in this State,for continuously voting for PDP”

“When you vote on the day of the Election, don’t go until INEC Officials enter the result”
“The National Chairman of the Peoples Democratic party Prince Uche Secondus warned INEC not to rig the Election.

“APC wants to steal this election and we will not let them rig it”
“If you rig the election, it will bring violence”
“We are for Peace and they are for war”

“At the Kano Rally, we saw Governors of other Countries distributing monies to rig Election”
“We call on the Government to close the borders, we saw other countries coming to campaign for Buhari”

“APC is in crises, that’s why the want to Rig the Election,” Secondus alleged.

Responding, PDP faithfuls in Abia vowed to vote for Atiku/Obi for 2019 presidential election.