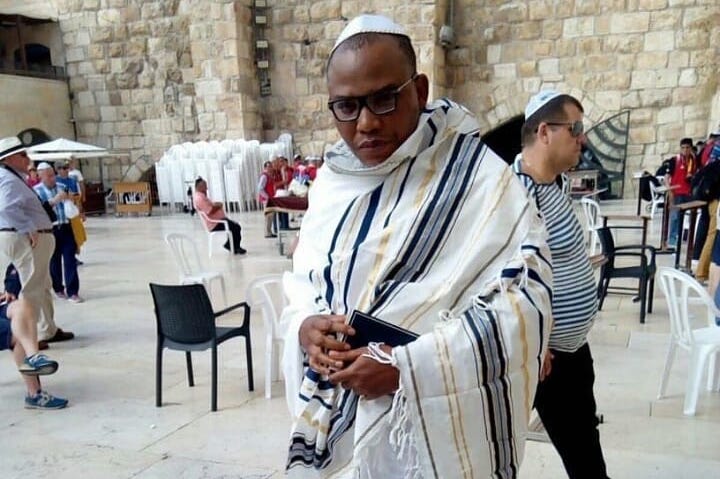 BREAKING: Nnamdi Kanu replies critics, reveals why he ran away to Israel

The leader of Indigenous People of Biafra, IPOB, Mazi Nnamdi Kanu, has replied Nigerians who criticised him for running away during the 2017 military invasion of his home in Afara Ibeku, Umuahia, Abia State.

It could be recalled that the army had invaded his home on September 14th, 2017, during the military exercise code-named; “Operation Python Dance II”.

Following the development, Kanu who resurfaced few months ago in Israel, had asked his followers to boycott the February 16th general election in Nigeria. According to him, boycotting the election will be like a referendum to the people of South-east.

Reacting to Kanu’s order, a lots of Nigerians has aired their different views. A twitter user recently described Kanu as a coward who ran away when the military invaded his home.

The latter opined that since Kanu is the leader of IPOB, he should have faced the army rather than running away.

Reacting to his critics, Kanu during his live radio broadcast from London, UK, wondered how someone without any weapon would face armed military men.

He said; “I want to ask those that criticise me what they have done in their life.

“Did you know that Nelson Mandela ran to Nigeria for safety during his time?

“I ran away because Jubril (Buhari) sent the military to my house to come and kill me and they expected me to stay and confront them, I’m unarmed just as IPOB members are unarmed group.

“No one in Nigeria have done what I have done. I came home and I confronted the army, I went to their court, I was unlawfully detained, I went home, conduct rally they sent their army to come kill me.

“Nnia Nwodo, Okezie Ikpeazu, Obiano and Umahi are the one that signed and brought the army to kill me.

“Yes I fled to Israel because it is the safest place for me and I needed to stay alive and achieve Biafra republic. Tell those who said that I ran away to read their history book, they will find out that all the popular human rights activists, both dead and alive ran away when it’s the best time to, Kanu concluded.