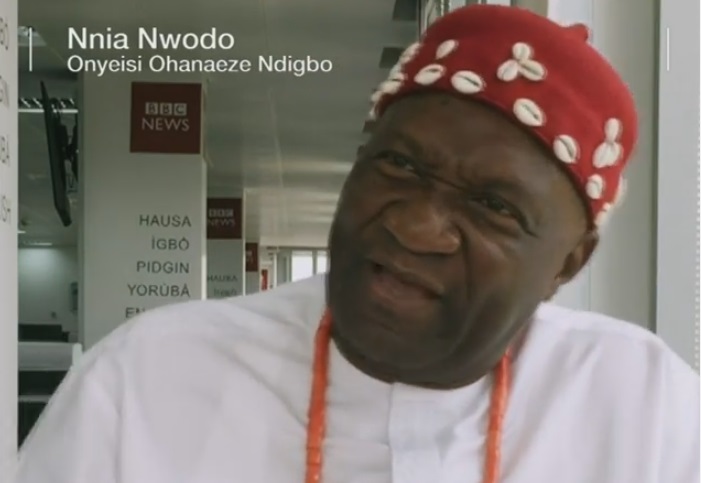 VIDEO: Ohanaeze President General reveals the only way to get Biafra

Following the agitation for Biafra referendum, championed by the leader of Indigenous People of Biafra, Mazi Nnamdi Kanu. The President General of Ohanaeze Ndigbo, Chief John Nnia Nwodo Jnr, has revealed the only way Biafra can be achieved.

Nwodo, was reacting over an order by the IPOB leader, which he (Kanu) directed his followers to boycott the 2019 election.

Recall that Mazi Kanu, during a live radio broadcast ordered his followers (IPOB members) to boycott the 2019 general election; according to him, “boycotting the election will be like a total referendum”.

Reacting to Kanu’s order, Nwodo, in a video by BBC Igbo, said Kanu’s move and tactics was wrong.

“Those that have no clue about Biafra, said they want a referendum, where did it happened? How can we get this country working should be the question we should ask ourselves.

“How else can we change Nigeria, let the Igbo people get what they deserve and have a sense of belonging in Nigeria? Should we go to war?

“Talking about the referendum, even if United Nations talks about it, it will not hold unless the Nigerian National Assembly agrees with the United Nations, accept the law, amend it and implement it, then there will be a referendum.

Nwodo who frowned at the spate of clash with the IPOB members and the army, said; “standing on the road, clashing with the army/police, is not the best way, rather, knowledge is the best way to get Biafra, Nwodo said.