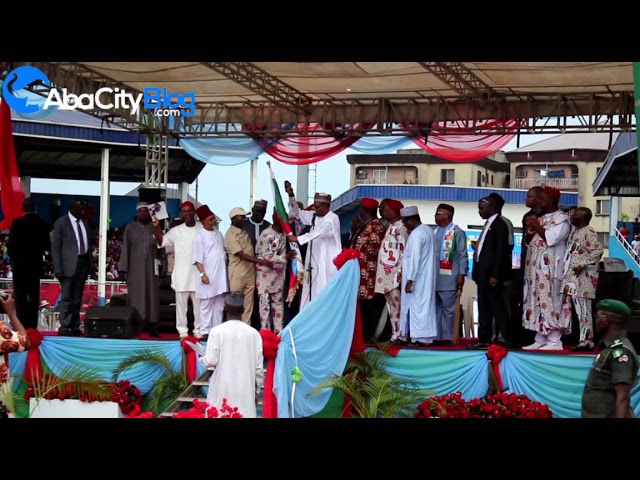 The president was in the city of Enyimba to commission a power plant project done by his administration in Ariaria International Market, Aba.

Mr. Buhari also, used the medium to flag off his presidential campaign in Abia and officially hand over the party’s flag to the state governorship candidate, Dr. Uchechukwu Sampson Ogah.

Apart from President Muhammadu Buhari and the National Chairman of APC, Comrade Adams Oshiomhole, the event was attended by the top All Progressive Congress, APC, members in South-East, the likes of; Dr. Chris Ngige, Dr. Ogbonnaya Onu, Dr. Orji Uzor Kalu, Governor Rochas Okorocha, and host of other dignitaries.

Handing over the party’s flag after making some speech, Mr. Buhari described Uche Ogah as the next governor of Abia State.

“I can now officially raised the hand of your next governor”, President Buhari said. Watch the video below.