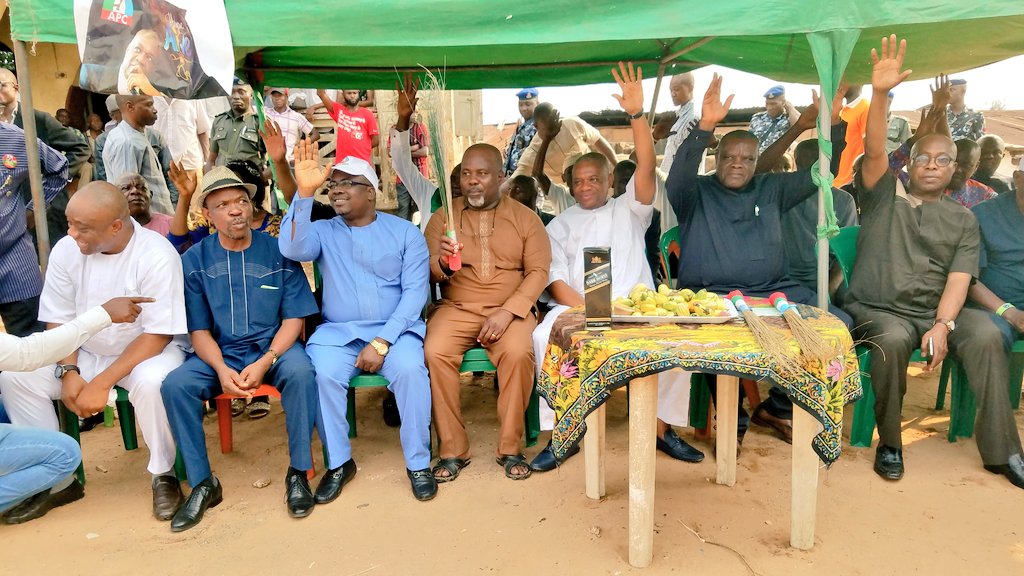 Abia North 2019 : You have our supports, Isuikwuato community swear to Orji Kalu

The people of Isuikwuato Local Government Area on Sunday joined hundreds of communities that have endorsed the All Progressives Congress candidate for the Abia North Senatorial election, Dr Orji Uzor Kalu (OUK)

This is even as two prominent chieftains of Peoples Democratic Party, Chief Obi Chima and Hon. Henry Kanu defected to the APC and received by Dr Orji Kalu and Hon. Nkiru Onyejeocha.

The populated community with six wards in their addresses delivered to Dr Kalu when his campaign train visited Isuikwato reiterated their firm supports for the election of OUK to the National Assembly.

The jubilant people of Eluama, Umuobila, Amiyiobilohia/Nunya, Umunnekwu Agbo,Ngbelu Umennekwu, Amaimo Ward 5 who trooped out in the numbers, said they specifically came to thank the former governor for the special love he has for them, which he started to demonstrate as governor between 1999-2007 through massive infrastructural development, peace and inclusiveness of Isuikwuato.

Hon. Onyejeocha who started her political career as a commissioner under OUK during the campaign recounted how OUK provided good governance and adequate empowerment in the state. She said she is a beneficiary of not young to run bill because she began to serve at a very young age courtesy of Dr Kalu.

“OUK do not need to campaign in Isuikwuato because he has done a lot for us. He gave our people appointments, free education and extended so much goodwill to us. He built skill and acquisition centers through which our people got employed. Since he left office, the PDP government has continued to dish one lie after another. They spent ecological funds recklessly and never used it for the purpose it was appropriated.”

“The one in the senate called Ohuabunwa don’t even deserve to be a councilor. He has done nothing for us and we can’t accept failures. The translation of his name means that he has rejected himself, so how can we accept a man that rejected himself?“ She questioned the crowd

In continuation, she said: “The truth is that OUK’s coming for campaign in Isuikwato is unnecessary because we have already sworn to vote him. He only came for courtesy sake and because of his humble nature. We will deliver Isuikwato for APC and only APC.“

Also speaking, the President General of Umuobiala, Chief Peter Onozie expressed delight that their “deplorable condition suddenly changed for better during OUK’s tenure as governor and with his emergence as senator, there would be development again.

“We are happy to engage you in person. We are glad to inform you of our full support to your senate ambition. We believe in you and it can only be you “ He told the former governor.

The President General said ex Gov Kalu’s administration built and inaugurated a health centre and seven modern classroom blocks that were “handed over to our secondary and primary schools when he was governor “adding that the road rehabilitations he has done in other parts of Abia North despite not been in office since 2007 is heartwarming.

At the campaign in Umunnekwu Agbo the people noted with delight that the first project executed by the governor after his inauguration in 1999 was in their area, stressing that they have missed to witness massive development projects ever since he left office .

“Your Excellency, We are here to tell you that you are doing very well. We are core supporters of capacity representation and we will massively vote for you”. Said a house of assembly member, Barrister Emeka Okoroafor

Affirming Agbelu Umunnekwu stance in his speech , Hon. Henry Kanu appreciated the good works of the former governor, especially in infrastructure, payments of salaries and pensions and fulfillment of promises . “We have concluded your re-election”. Hon Kanu said.

The community leaders speaking in different capacities reassured OUK of his victory at the poll and their continued support, prayers and solidarity.