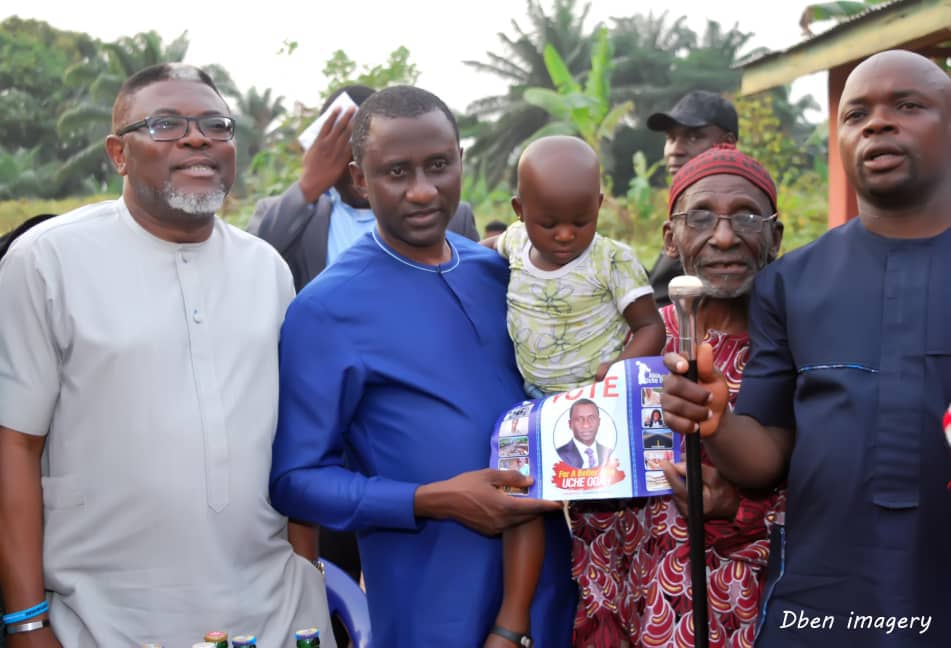 …promises to revitalise, modernise and mechanize the farm if elected as Abia State Governor

The governorship candidate of the All Progressives Congress (APC) in Abia State made a historic visit to ULONNA FARMS on 18th January, 2019.

The farm is one of late Dr Michael Okpara’s legacy projects established over 57 years ago under the old Eastern Nigeria.

He visited the farm settlement located on thousands of hectares of land in an interior connecting 6 ancient communities, including Ohuhu and Nkpa, in preparation for his agricultural revolutionary plan for Abia State.

Dr Uchechukwu Sampson Ogah lamented the abandonment of the farm settlement which is one of the six established by late Dr Michael Okpara, the former Premier of Eastern Nigeria.

Settlers in the farm cried out to Dr Uchechukwu Sampson Ogah requesting him to come to their aid as they have been abandoned by successive governments.

The oldest settler who is 104 years old narrated horrible experiences of settlers and their abandonment by successive PDP government in Abia State. Saying that Dr Uchechukwu Sampson Ogah is the only notable Abia person to visit the farm in the last 19 years.

Adding that the farm settlement is without access road and social amenities.

Speaking to the people, Dr Uchechukwu Sampson Ogah said “I came to see things for myself. This is one of the legacy projects established by late Dr Michael Okpara of the old Eastern Nigeria. They are 6 of them across Abia State located on thousands of hectares of land in the interiors connecting communities. I will revitalise, modernise and mechanize all of them. It will help boost our food production, for our consumption and export and will become centres of agricultural tourism”

“These are some of the projects that will attract foreign investment into our state, provide job opportunities for our people and help our people acquire modern agricultural skills. I am already in touch with foreign investors”

He said his visit was to have a first hand knowledge of the farm as he was preparing to bring in foreign investors. He assured the settlers that social amenities like functional health facilities and schools will be built in the farm once he comes into government.

He was accompanied by the State House of Assembly candidate of the All Progressives Congress for Umuahia North State Constituency, Engr. Nwabueze Owuneme, who promised to work with Dr Uchechukwu Sampson Ogah to actualize his plan when elected the governor.

The entire community agreed to vote for Dr Uchechukwu Sampson Ogah as they thanked him for coming to identify with them.

Dr Uchechukwu Sampson was also joined on this historic visit by some members of his campaign team, including Chief Otta Kalu, Chief Victor Ezeji and Emeka Ihemegbulam.