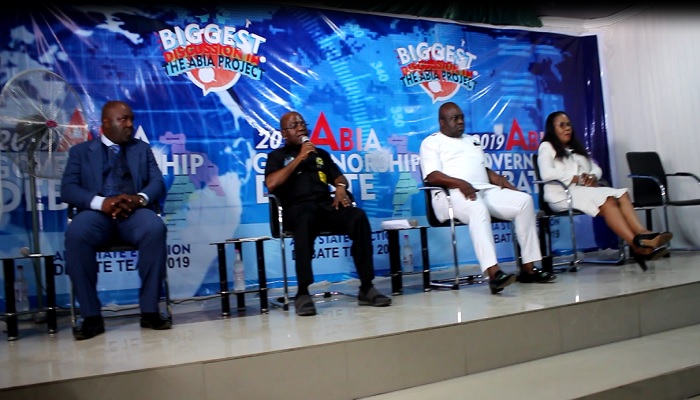 Abia Guber Debate: Almost a ‘war’ between Ikpeazu and Otti

The governor of Abia State, Dr. Okezie Ikpeazu and his opponent, Dr. Alex Otti, the governorship candidate of All Progressive Grand Alliance, APGA, were yesterday verbally clashed in a debate organised by Online Media Practitioners Association of Nigeria, Abia State chapter in collaboration with state based media houses.

The debate held at Abia Hotels in Umuahia, which has other guber candidates as participants, was almost a war between Ikpeazu and Otti as they engaged each other in heated arguments.

Otti had dismissed Ikpea­zu’s claims of excellent perfor­mance as “a woefull failure “.

Ikpeazu had claimed that he built quality roads in the state, a feat he said none of his prede­cessors had achieved.

He said that no previous administration in the state was able to construct any road that lasted up to 10 years.

But in a swift reaction, Otti said he had personally visited and measured all the roads built by Ikpeazu across the state.

According to him, the entire road built by Ikpeazu since he came on board were 59 in number and measured 79.38 killometers put together.

Other candidates who participated are; Blessing Nwagba of Social Democratic Party, SDP; Emeka Uwakolam of Accord Party, AP.

The debate ended successfully, but there was a shootout which was caused by some youths said to be Students.

The students, according to our investigation, had also organised their own debate at Damgrate hotel under the aegis of National Association of Abia State Students.

Further investigation showed that they were al­legedly annoyed because their own debate was boycotted by the governorship candidates.

At the end of the debate, the supposed students surged towards Ikpeazu apparently to hail him and draw his attention to their own event, were stopped by his security aides.

The students’ leader was said to have been arrested and beaten by the Governor’s secu­rity aides.

Angered by the action of the security aides against their leader, the students were said to have blocked the entrance gate to the hotel, refusing to let him leave the premises.

Apparently to disperse the crowd and smuggle the Gover­nor out of the scene, Ikpeazu’s security aides were said to have started shooting sporadically into the air.

There was total confusion and stampede as security aides attached to other governor­ship candidates at the premises joined in the shooting.