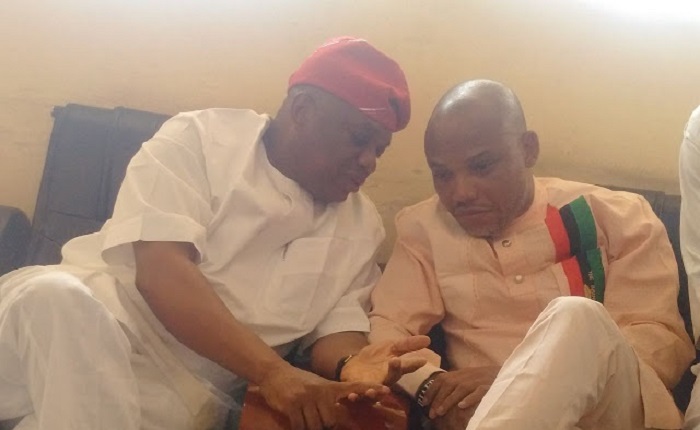 The All Progressives Congress (APC), Abia chapter has warned aides and officials of Abia State Government against involving Dr. Orji Uzor Kalu in the military raid of the home of the leader of IPOB, Nnamdi kanu.

This is following an allegation by the Commissioner for Information in Abia State, Chief John Okiyi-Kalu some days ago, during a radio programme in Umuahia, where he alleged that Dr. Orji Uzor-Kalu was responsible for military invasion in Kanu’s home.

In the words of the Commissioner, “Let me set the record straight, Orji Uzor Kalu was the brain behind the invasion of Nnamdi Kanu’s residence in Afaraukwu Umuahia. Quote me anywhere you go.

In a swift reaction, the Abia APC state publicity secretary, Comrade Ben Godson said the allegation was not only spurious, but the height of irresponsibility for the commissioner to try to twist facts and tell cheap lies to deceive Abians for the sake of politics.

Godson added that what the commissioner failed to realise when he was trying to deceive Abians with his lies was that the IPOB leader is knowledgeable and intelligent enough to know who did what before his home was invaded by the military.

In his words: “Some of us should be responsible in our utterances; we shouldn’t bring sycophancy in everything we do. We should not be constantly telling lies to deceive the people even when the facts of the matter are very clear.

RELATED POST:   Finally, Deji Adeyanju Reveals who made Peace between him and Nnamdi Kanu

“The whole world heard Nnamdi Kanu narrate who invited the Operation Python Dance into Abia State that culminated in the invasion of his home.

“So, for the commissioner to say it was Kalu when the IPOB leader himself has told the world who the person is, is not only laughable, but a cheap propaganda that can only come from a lazy image maker.”

Speaking further, the APC state publicity secretary said, “Nnamdi Kanu knows what happened and he has told Abians what happened and I will like to advice some officials of the state government to mind what they go on air to ditch out for public consumption so that they don’t keep exposing themselves the more.”

Godson said that prior to the invasion of Kanu’s home, governors from the South East met with the top echelon of the military in Enugu where the decision to proscribe IPOB and other things relating to what happened to the IPOB leader, was taken.

He added that Okiyi should be bold and honest enough to tell the world whether Kalu was at the Enugu meeting where the decision against IPOB and its leader was taken.

“It is a known fact that prior to the proscription of IPOB and the invasion of its leader’s home, South East governors met with a high ranking army officer where the decision was taken. The commissioner should tell the world whether Kalu was at the meeting.”

Godson placed it on record that Kalu was the first and only Igbo leader who visited the IPOB leader when he was in prison to encourage him and also followed that with a visit to Kanu’s father in Afaraukwu, Umuahia.

Godson challenged Okiyi to mention any Abia State Government official that has paid visit to Afaraukwu since after the invasion of the IPOB leader’s home.

“If Kalu did not mean well for the IPOB leader as Okiyi wants Abians to believe, he couldn’t have gone to visit him when he (Kanu) was in prison and followed that up with a visit to his father in Umuahia.

“As the image maker of the state government, Okiyi should be able to tell Abians if he or any other government official has visited Afaraukwu community which is a stone throw from the seat of power, to at least know the extent of the damage to the home of the IPOB leader.

“The IPOB leader is one man that does not believe in bending facts, he says things the way they are no matter whose ox is gored. He knows those that were responsible for the raid of his home and has mentioned them, he knows definitely that the former governor (Kalu) was not responsible, so, anybody bringing Kalu to the show, will not change the narrative”, Godson enthused.

He said no amount of cheap propaganda will stop APC from taking over the state and Kalu from going to the senate after the election.