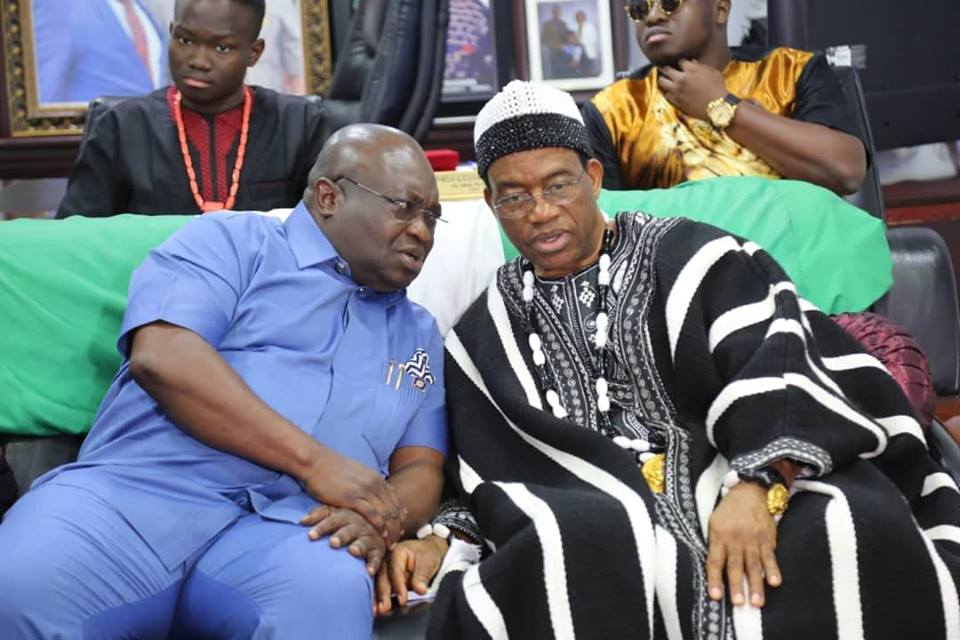 I never knew Ikpeazu would be a governor – Tor Tiv

…says the governor was one of his very brilliant, sharp Ph.D students.

His Royal Majesty, Orcivirigh Professor James Ortese Ayatse, Tor Tiv V, a professor of Biochemistry, has said that the Governor of Abia State, Dr Okezie Ikpeazu, a biochemist, was one of his most brilliant and exceptional Ph.D students at the University of Calabar.

Tor Tiv, was one of biochemistry lecturers of Governor Ikpeazu during his (Ikpeazu’s) Ph.D studies in Biochemical Pharmacology at the University of Calabar.

Speaking during a state banquet organized in his honor at the Government House in Umuahia, Tor Tiv V, said: “When I knew Victor (Okezie Victor Ikpeazu) many years ago, I didn’t know he would be a governor. I never knew that I would sit beside him today as Governor of one of the important states in Nigeria.

He was one of our very brilliant, sharp Ph.D students. He finished his Ph.D program at the university in record time.”

In his response, Governor Ikpeazu said that Tor Tiv V was one of the lecturers that inspired him in his choice of becoming a university lecturer.

“This event has provided me the opportunity to say what I have never said anywhere or to anyone. When I arrived University of Calabar for my Ph.D studies in Biochemical Pharmacology, Professor Ayatse (Tor Tiv) was one of the lecturers that inspired me. He made me see my choice of becoming a university lecturer as the right one. I then promised myself that I would equal his achievements in academics. But when he became the Vice Chancellor, University of Agriculture, Makurdi and later Vice Chancellor Federal University, Dutsin-Ma, I knew then that I can’t equal his academic heights.”

According to Governor Ikpeazu, Tor Tiv, as Chancellor, is expected to use his huge influence as a first class traditional ruler in the country as well as his wide experience and contacts in the tertiary education sector in Nigeria to further the interests of the Abia State University, which he said is one of the best state owned universities in Nigeria.

In his speech as the Chancellor, Tor Tiv said his appointment as Chancellor of ABSU has the potential of strengthening our existing relationships and opening up new areas of cooperation and collaboration not only between Abia and Benue states but our two geo-political zones and Nigera at large.

“Let me express my profound to the Governor of the State Okezie Victor Ikpeazu, Ph.D for my appointment as the fifth Honourable Chancellor of Abia State University. Perhaps it is worthy of note that by divine coincidence, I am also the fifth Tor Tiv of the Tiv nation.

“I have heard of your tremendous support to Abia State University which has made the university highly rated amongst Nigerian universities. This you have done in the face of the present dwindling resources and economic down-turn of the country and competing needs. I encourage you not to relent in your funding efforts of the university.”.