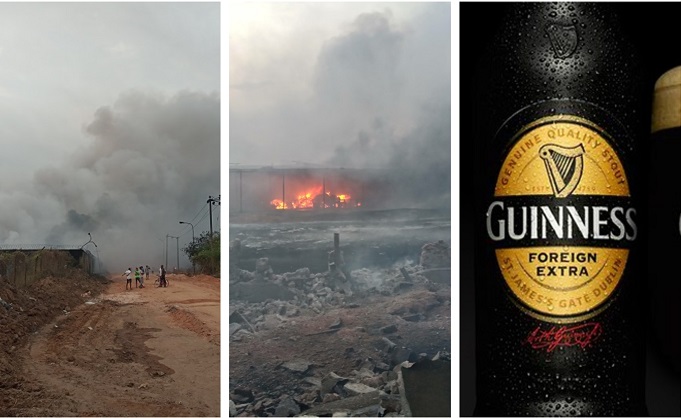 The fire which the cause remains unknown started by 11:30 am and our reporter who arrived at the scene, saw the fire still burning uncontrollably, with the Abia State fire servicemen on the ground.

Speaking to newsmen, Eric Otuonye, the station officer in charge of the security at the depot, said they noticed some smoke gushing out from parts of the company around 11:30 am and before they know, the fire has escalated.

“The fire escalated when it reaches the stack of crates, we try to put off the fire but it was too much.

“Although, Fire services arrived, from Aba, Umuahia, including the little fire fighter we have here and the help of our neighbouring company, Clover Paint. Since 12pm we are at the forefront of the fire, trying to put it off.

Speaking on damages, Otuonye said billions of Naira was destroyed by the fire.

Whether it will affect workers, the station officer, said the place is already shut down and employees here are the security and policemen guiding what is left in the depot.

Speaking on the incident, Okezie Ojo, Aba commander of fire service, said when he got the alert, he and his men immediately got into action.

“When we got here, we try to put it out the fire, but the fire was too much and I decided to call Fire service comptroller, V.O Maraugo, who felicitate help from NNPC who issued us some foam chemicals which we use to putting off the fire.

In what could be the contents that escalated the fire, he said, “It’s empty bottles and crates, and I suspect there are also chemicals which made the fire burning uncontrollably.

Also, speaking on the fire incident, a Police officer (name withheld), who spoke to our reporter said they got the information around 12pm, and with that, they rushed to action.

“We got the information around 12pm and we swooped into action. I called the fire service men and they came as fast as possible, even Commander 55 sent their men to the scene.

“When we got here, there was no light to pump water for the fire servicemen, Clover Paint Company has to give the fire service water and including the help of the villagers who came early trying to put off the fire.

On the assurance of safety for people living around the area, following the facts that the NNPC pipeline crossed the place, the Police officer said there is no cause for alarm as firefighters has already secured the area.

“No cause for alarm, fire service men has already secured the place, they started from the area which might cause havoc and put it off, by God’s grace, I can assure you before 6pm the fire will be totally put off, he said.