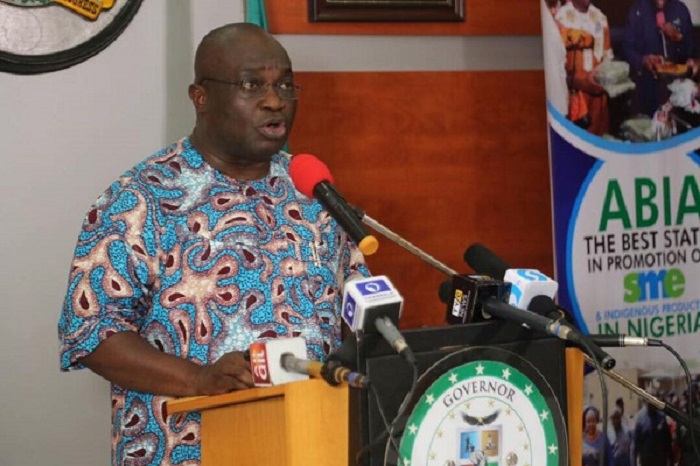 Residents of Aba, the commercial hub of Abia State, yesterday sent ‘save our souls’ calls to the Governor of the State, Dr. Okezie Ikpeazu following the panic and fear caused by several minutes of prolonged first rainfall of 2019 in the city.

Our reporter who visited several places within the city gathered that the panic that accompanied the first rain of 2019 was as a result of the deplorable nature of so many roads in the commercial city and the abandonment of construction works on some ongoing projects.

Among all the affected areas in Aba, ABACITYBLOG gathered that the worst hit by the panic from the impact of the first rain of the year and the unpreventable subsequent ones are: Ndiegoro, Uratta and the Over-Rail axis of the commercial city.

Some of residents who spoke to our reporter said that the last two months of 2018 were more of a miracle to them as they did their businesses smoothly, thanks to the dry season that got their roads dried up. They added that with the rains fast approaching, they fear the worst.

Speaking to our reporter, Mr. Maxwell Mbagwu, a landlord at Obohia Road, off Nkwor-Ngwa Market in Ndiegoro axis said he is afraid because he knows that him and his tenants are about to see the painful part of 2019 faster than expected.

He said: “To be honest with you, I don’t hate rain. But I now fear rainy season because of where I found myself. The weather is too hot, yet people like me are afraid of seeing rain. Do you think that’s normal?

“You came here by yourself and you can see why we are afraid. We are about to begin a new phase of our suffering for this year so so early. I was thinking that it will be by February, but it took us all by surprise yesterday.

“I pity my tenants and myself as well. They’ll pay rents in pains and I will be collecting with remorse. Most of them who have cars do park along the good portions of the road or even as far as other adjoining street.

“For me I can’t drive again because it’s more cost effective to enter Keke than to destroy your car. The truth and nothing but the truth is that Abia State Government has abandoned us. We plead that they remember that we are humans and still alive.”

A resident of Igbere Road off Ohazu Road, within the same Ndiegoro axis who simply gave her name as Mrs. Celine pleaded with the governor Ikpeazu to instruct the contractors handling the Igbere road to come back to site.

She said that the abandoned drainage from Ngwa Road to Igbere Road, channeled all storm water from yesterday’s rain into their residents thereby making them homeless.

“Our homes were like river yesterday. Those who went out couldn’t return while those of us at home had to endure the whole problem. We don’t know if they have stopped the construction, but the drainage stopped that place you’re seeing there.

“We are suffering and we plead with the governor to save us before we perish. The smell of the storm water is what no one should wish his enemy to perceive. We are pleading for mercy and help please.

“For some years now, our children contract different disease and we waste money that could have been used for other things on hospital bills.

“We the adults get injured on daily basis. We only enter our homes by climbing blocks and planks placed on the roads which often leads to injury.

“Just few days to the New year, we are back to it again. The contractors have all disappeared. We are now leaving like pigs in the midst of debris and mosquitoes. Aside the state of our finance, we cannot be in this kind of place,” she lamented.