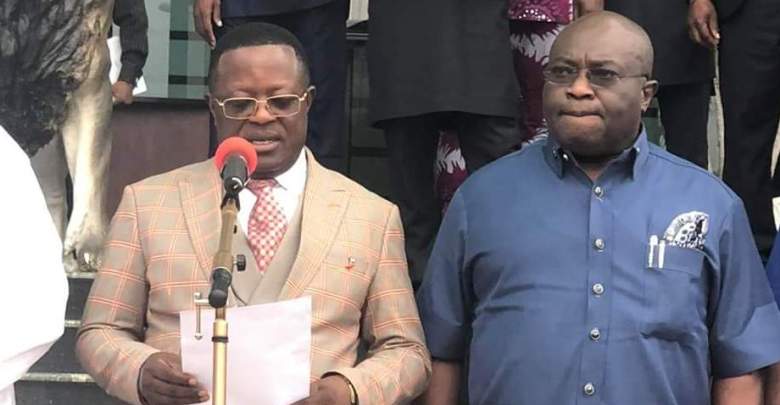 The groups, which met with the Forum of Biafra Agitators and Chaired by Mazi Alex Okemiri, released the following communique. It warned the leader of Indigenous People of Biafra, IPOB, Mazi Nnamdi Kanu to concentrate on his Biafra projects and leave alone the South East governors, namely, Governor Okezie Ikpeazu of Abia, and Governor David Umahi of Ebonyi States.

Below is a communique released after the meeting.

(1) That Nnamdi Kanu should Concentrate on the no election campaign and leave Abia Governor Ikpeazu and Ebonyi Governor Umahi, responding to his Order” of Voting out Ikpeazu and Umahi Out of Office during his Saturday broadcast” its laughable that Nnamdi Kanu is derailing from his Biafra agitation and now being sponsored by politicians to cause Confusion and pursuing Campaign of Calumny against those who mean well for him, Nnamdi kanu and his ipob members have no Pvcs/ Voters Cards irrespective of our earlier suggestions to ipob members to register during Voters registration, Where will Kanu and ipob members get Pvcs to vote out Gov ikpeazu and Umahi? Kanu is looking for settlement.

(2) Ipob should learn from the Maturity and non violence approach of Massob led by Uchenna Madu, who had expressed willingness to allow INEC to Conduct election in Southeast and ensure there’s no bloodshed during this period of Operation Python Dance111.If nnamdi Kanu and Ipob Continue to rant and lure innocent Youths to their early grave when him and his family is enjoying at Israel,we will drag him(Kanu) to Hague for Inciting and Act leading to Mass Murder and Geocide of igbo Youths.

(3) On Adams Oshimole Allegations that Governor Ikpeazu had been Collecting bail out funds without paying Salaries, We are shocked that most of Our members,Who are Abia Workers are paid as in when Due,no Abia Worker is being Owed, And on the lies trending that Made in Aba Products are mere Propaganda by Apga Abia Guber Candidate Alex Otti is not true,Its on record that Gov Ikpeazu had put Aba in the World map,and the Signing of Enyimba Economic City and Enyimba Free trade Zone by Federal Government and Abia Government will tackle the Unemployment rate in Nigeria,with Creating of 300,000 Jobs through Enyimba Economic City Made President Buhari to Stay away from the flag off Apc Abia flag off Campaign,as there’s nothing to campaign against Ikpeazu.